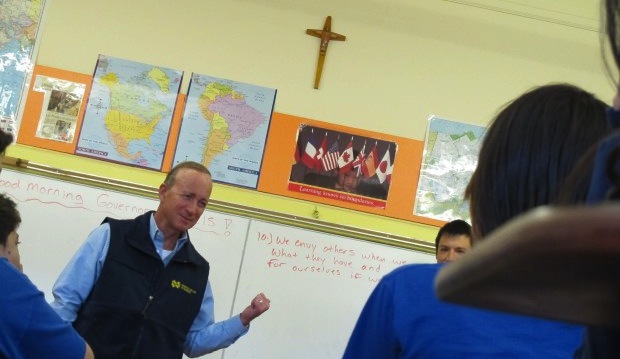 Governor Mitch Daniels addresses a class at Our Lady of Hungary Catholic School in South Bend, where enrollment has skyrocketed due to the state's private and parochial school voucher program, during a visit in December.

At the beckoning of a scratchy voice piping in over the PA system every morning, students at Our Lady of Hungary Catholic School rise from their seats to recite a prayer together. It’s a typical scene in a parochial school.

But there’s one big difference at this school this year: 65 of the students are attending Our Lady with financial help from the state this year after fleeing South Bend’s public schools.

“Why are parents taking kids out of public schools? There has to be something wrong,” said parent Jeanetta White, whose children — enrolled at Our Lady with the help of the state’s new private and parochial school voucher program — have helped make Indiana part of a national trend. 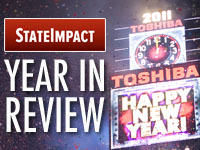 The national push to create alternatives to traditional public schools led The Wall Street Journal‘s editorial page to proclaim 2011 was “The Year of School Choice.”

“School choice proponents may have had their biggest success in Indiana,” the editorial said. In 2011, Indiana education officials launched a new school voucher program, in which even an Indiana family of four making up to $62,000 per year could get a partial tuition scholarship from the state to attend a private school.

The state’s largest teachers union is backing a lawsuit against the voucher program, which diverted more than $16 million from Indiana’s public schools in 2011.

What spooks public schools so much about the voucher program is the fear that it could siphon off large numbers of students — and state funding — from public schools. 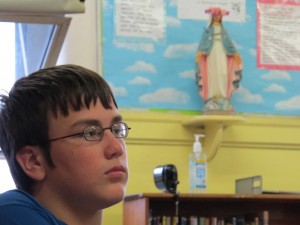 Symbols of Our Lady's Catholic grounding can be found in every classroom, like this statue behind a student in Heather Snavely's class.

“Any capitalistic or market system will create stratification,” John Ritzler, director of research and evaluation for the South Bend public schools, told StateImpact in November. “You’ll have a market for high-end products and a market for low-end products. That’s the exact opposite of what public education in our country was set up to do. Public education was set up to provide quality, free, and appropriate education for all students.”

Their fear comes partially from high expectations Indiana’s top politicians set when the voucher program was created. When Gov. Mitch Daniels signed into law a bill authorizing the state’s voucher program, observers dubbed the so-called Indiana Choice Scholarship Program one of the most expansive voucher programs in the country.

At least this year, though, public school districts’ worst fears have not yet come to pass. Only 3,919 students are enrolled in private schools with the help of a state voucher. State officials would have allowed as many as 7,500 to enroll, but attributed this shortfall to the limited amount of time they had to market the program to parents and answer private school administrators’ questions after the law was passed.

As Education Sector’s Richard Lee Colvin told StateImpact in September, more accurately, observers might have said Indiana’s voucher program has the potential to be the most expansive:

All of the other programs started small, and then went big. Indiana’s starts big and plans to go bigger. It’s big in terms of the income levels, and it’s big in terms of the fact that you don’t have to be at a failing school to access a voucher. It is poised to have the greatest growth and the greatest, the highest level of participation — so in that sense, it is the broadest.

But it doesn’t have the largest number of participants now, and it won’t for some time in the future, and as Wisconsin has removed the caps on enrollment in its voucher program and Ohio is trying to do the same — in terms of sheer numbers, Indiana’s won’t be the biggest.

Since the beginning of the school year, Gov. Daniels has said he has measured expectations for the voucher program’s future.

“I’m not sure that it will ever be a huge program in this state. It may always just be a percent or two of our kids. That’d be fine, because it means the other parents are confident that their child is getting a great public education in the other public school or charter school that they’re in,” Daniels said in November.

Next year, the voucher program’s enrollment cap will increase to 15,000 students.

In November, a StateImpact analysis showed three out of four students now enrolled in the voucher program left a public school district where fewer than 70 percent of students passed state tests. But the data didn’t clearly show whether students were flocking to private schools that were any better.

Here’s what our analysis showed:

While the data are mixed, parent Jeanetta White says there was no other choice for her four adopted children, who now attend Our Lady of Hungary as part of the voucher program. White says she was so fed up with her kids’ public school that she would have enrolled them in a private school with or without the help of a voucher program.

“They were going to come anyway, but the voucher just pushed us over the threshold,” White says.