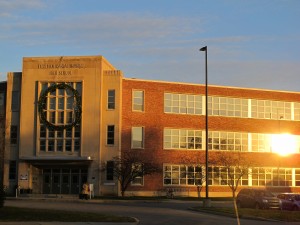 Manual High School is one of three failing Indianapolis schools that will open next month under the management of Charter Schools USA.

“I think it’s OK to have some competition for kids to the extent we’re all trying to create better schools.”
—Jon Hage, CEO of Charter Schools USA

“It’s no longer about what or if but now how we continue to work together because the reality is for the next four years, at least with the current contract, is IPS, CSUSA and the Department of Education will need to work as team members for the best interest of kids,” says Hage.

Teachers at the three schools begin training this week, but turnaround operators still aren’t sure how many students to expect when school starts next month. About 40 percent of students at the takeover schools transferred to another school within IPS.

In February, after the enrollment deadline passed, teachers told StateImpact students had been kept in the dark by turnaround operators as to what classes and activities would be offered if they decided to stay. Turnaround operators held a series of public meetings to help families make a decision but said they couldn’t make any guarantees until after the final enrollment figures came back.

The new principal at Emma Donnan Middle School, Terry Stollar, says Charter Schools USA is preparing for 350 students on August 6 but expects enrollment to continue during the first few weeks of school.

“We are making plans to help those people who come in late so that they can be very efficient for them to get started in school,” says Stollar. About 530 students attended the middle school last year.

Stollar says the biggest challenge in the coming year will be changing the culture at the turnaround schools so students are excited about learning. She also says she hopes the community will rally to support the schools’ new leadership.

On Sunday, alumni spoke at a community picnic about restoring traditions to the schools. Hage says he thinks once parents see what the turnaround operators are doing, they’ll want to send their kids there instead of IPS.

“I think it’s OK to have some competition for kids to the extent we’re all trying to create better schools,” Hage says.