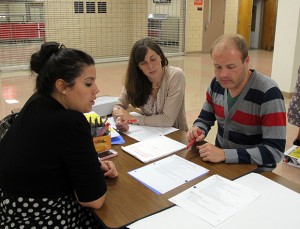 Three math teachers discuss how to group concepts as they design their curriculum. Charter Schools USA encourages its educators to start with state standards and reverse engineer lesson plans.

Can a tucked-in shirt or a handshake turn around a failing school? According to a series of articles this weekend in the Indianapolis Star, the new operators of four struggling Indianapolis Public Schools are using structure and discipline to communicate their expectations to students.

Scott Elliott writes that at Arlington, which is now under the control of Indianapolis-based non-profit EdPower, teachers and administrators stood in the doorways of classrooms and shook students’ hands as they entered.

It caught some students by surprise, Elliot writes. They weren’t used to adults extending them a sign of professional respect and courtesy.

Across town at Emma Donnan Middle School, one of three schools Florida-based Charter Schools USA has been tasked with transforming, students had to line up in alphabetical order before entering a classroom, writes Robert King.

Want to ask the teacher for a tissue? Raise one finger in the air. Need a sharp pencil? Raise two fingers. Have an emergency or need a private chat with the teacher? That’s three fingers. Potty breaks are four. Want to ask or answer a question? That’s five.

Want to know what’s going on in class today? In every classroom in the building, in the same corner of the chalkboard (or whiteboard) there’s the day’s agenda, detailing the activities down to the minute.

Hall passes? Students who have been gaming the system to get out of class are out of luck. Every child in the school has been given a day planner. Teachers scribble on the planner the child’s reason for being in the hall. If your planner starts to fill up with potty breaks, somebody’s going to know.

After observing the changes, King writes he is “cautiously optimistic” CSUSA can change the culture at Donnan.

It’s a word teachers used a lot at Donnan, T.C. Howe and Manual High School even before students arrived. Curriculum specialists with CSUSA explained the importance of creating a “culture of excellence” during the two-week training period at the three takeover schools.

“It’s pretty black and white,” Spencer Lloyd, the choir teacher at Manual, told StateImpact. “This is what is expected of you, and if you do this, you’ll succeed. Our students will succeed.”

As we reported last week, enrollment is down at all three schools. If attendance isn’t up by Sept. 14, the day the Indiana Department of Education uses to count students, CSUSA will take a hit in state funding.

EdPower, the Arlington operator, is in a similar predicament. It’s trying a staggered start — something that has worked very well at Tindley, the Indianapolis charter school the company also runs — where each grade begins school on a different day.

But only about a third of the seventh graders the school expected showed up on the first day back.