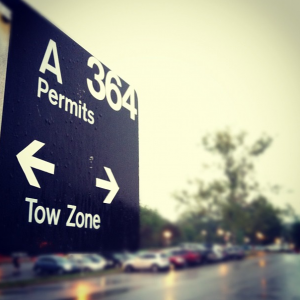 A rainy morning in the IU Bloomington parking lot.

It’s hard to start this post without full disclosure: StateImpact Indiana is part of WFIU, the public radio station funded by Indiana University — and we’re all (proud?) IU Bloomington parking pass-holders. From the AP:

IU Chief Financial Officer Neil Theobald said the school is about two weeks away from issuing a request for proposals for a lease that could last 30 to 50 years for parking spaces at IU’s Bloomington and Indianapolis campuses.

Many cities, including Indianapolis, have used long-term leases to cash in on parking assets, but this year Ohio State became the first in higher education to do so.

IU’s Trustees discussed a possible parking deal at their August 17 meeting. What’s new is an Indianapolis Business Journal report from this weekend suggesting a deal appears to be imminent.

Essentially, IU Bloomington would sell its parking facilities to a private company to get a one-time cash infusion. Then, for however long the lease lasts, the university would make annual lease payments to the same private company for use of the parking spaces.

Our counterparts at StateImpact Ohio have details of the lease at Ohio State, where university officials have drawn up a 50-year contract with an Australian company, QIC Global Infrastructure. The company made an up-front investment of $483 million to the university, and the Buckeyes will pay $30 million per year back to QIC.

The Upsides & Downsides Of Privatization

Funding for Indiana’s public universities has been a political bone of contention. School officials are frustrated by the state’s shrinking higher ed budgets. Lawmakers say Indiana cannot afford the funding levels the schools want. Through it all, tuition has gone up.

To cover the gap left by the receding tides of state budgets, universities have turned to the private sector. Why? As reporter Molly Bloom writes at StateImpact Ohio:

“Over 50 years, a $483 million bid would prove $3.1 billion in investment earnings.” That’s money the university can use to hire more professors, give out more in scholarships, and invest in the arts and humanities.

Expect more deals like this, writes Richard Vedder, who studies higher education for Ohio University and the American Enterprise Institute, at Forbes:

Protected in the past from market forces by generous government subsidies, schools will find that the decline in those subsidies will mean markets—and consumers—will play a greater role in determining their destiny. And like the market-driven private sector, higher education will face something rarely seen in the past: the creation of obvious winners and losers, with the latter group of schools facing, in many cases, extinction.

That’s not necessarily bad, Vedder continues at The Chronicle for Higher Education. “The conventional wisdom that more spending on higher education by governments facilitates economic growth simply does not fit with the American evidence regarding state appropriations,” he writes.

But on the other hand, writes University of Buffalo professor Bruce Johnstone…

Opponents of privatization claim that it distorts and subverts the core mission of a college or university, which is to seek truth and generate new knowledge, unfettered by the need for commercial application or external justification, and to preserve and transmit both these truths and society’s underlying cultural heritage.

In Virginia — where lawmakers have decreased funding for public universities but allowed the schools autonomy to seek funding from private sources — opponents fear privatization could lead to even further increases in tuition.

*CLARIFICATION: An earlier version of this post said IU’s Trustees “first heard word” about a parking deal on August 17. IU spokesperson Mark Land reached out to us to clarify the Trustees had asked school administrators to examine the potential for public/private partnerships earlier this year. “It wasn’t the first time the Trustees had been made aware of the possibility,” Land says.