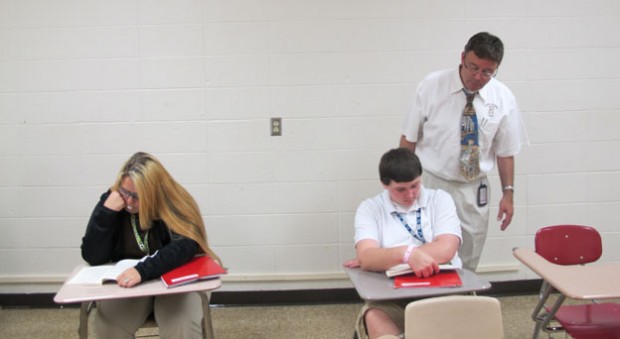 T.C. Howe High School teacher Kevin Sandorf has stripped his classroom walls of the posters, decorations, and even several flatscreen monitors he bought himself. T.C. Howe will be controlled by a state-appointed turnaround company next year. Sandorf will teach at IPS' Shortridge High School next year.

Freshman English teacher Kevin Sandorf considered Room 224 at T.C. Howe High School a second home. But in the final days of this school year, he says he felt “a little naked” in that room.

Sandorf had poured thousands of his own dollars into the room, buying flatscreen monitors, a sound system, and even desks at school auctions.

But with a state-appointed school turnaround company taking over Howe on July 1, Sandorf is moving to another IPS school next year. So a week before school let out, Sandorf cleaned out his room, leaving few decorations on the whitewashed cinderblock walls. Students, he says, were surprised.

“The thing I’ve tried to get across to students this year,” Sandorf said as he watched kids file into Room 224 on the second-to-last day of school, “is that even though we’re walking out of here tomorrow at 2:30, please don’t walk out of here with your head held down.”

Room 224 is one of the few signs big changes are coming to T.C. Howe — a new operator, an almost-total turnover in staff, a mass exodus of students.

There are few visual reminders of the state takeover now in progress at five schools in Indianapolis and Gary — a process marked with frustration over countless detail questions for administrators.

But Sandorf says the rhetoric around the takeovers has become a bit harsh. He bristled when the head of one school turnaround company compared Indianapolis Public Schools’ academic problems to stage three cancer during a recent state board meeting.

“That’s hurtful,” Sandorf says. “For someone to come in and say that when, for me to be quite candid, you probably don’t even know where the main office is, give yourself some time to really be in the trenches before you come back and make some of those comments.”

Sandorf says it’s easy to focus on the negative at Howe. He says the school had a dedicated staff, good teachers. But getting students to show up was often his biggest problem. The school serves some of the city’s poorest neighborhoods.

“Look at attendance, and that is a screaming piece,” Sandorf says.

But some of the criticism is justified, Sandorf adds. He says Indianapolis Public Schools administrators understand the challenges of educating inner-city students, but officials’ good intentions are often lost in ineffective action plans.

“The initiatives start out in central office with the pressure of a fire hydrant and by the time sometimes it hits the classroom, we’re down to a garden hose. And I don’t know how that happens,” Sandorf says.

Sandorf says he hopes the takeover schools succeed next year.  He just hopes next year’s Howe won’t be compared with this year’s Howe. He says it wouldn’t be fair — the turnaround companies are getting extra financial support from the state next year.