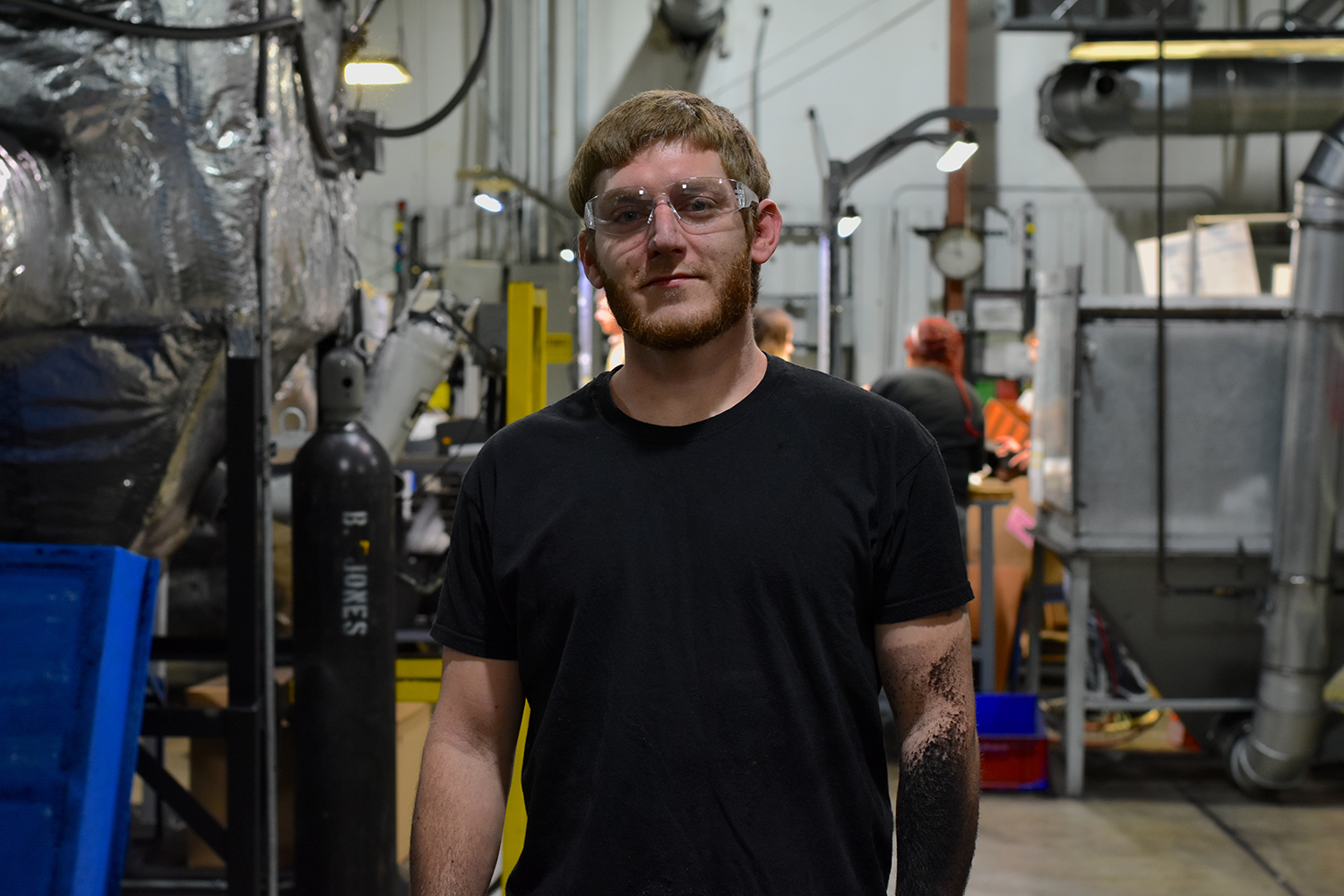 Zach Ritchie is the first graduate of the Potter's House, a collaboration between a group of North Vernon pastors and Decatur Plastic Products. (Justin Hicks/IPB News)

A couple of years ago, Zach Ritchie was driving back from Cincinnati with friends after buying heroin.

“[We] got the stuff, went to the mall to see what all was at the mall, and stopped at the gas station,” Ritchie says.

At the gas station, someone brought out the drugs.

“We all did it,” he says. “And by the time we pulled out of the gas station it had just totally stopped my heart and everything.”

Ritchie's friends stripped him of all his belongings and prepared to get rid of his body. Fortunately, someone gave him a shot and Ritchie eventually survived.

But even after that, he kept using drugs until he was eventually caught at a traffic stop near his home and arrested for possession. In fact, the local sheriff’s office in Jennings County estimates that a little more than half of all arrests they make stem from drug use.

Today, Ritchie is in a completely different place. He has a full-time job, a fiancé, and doesn’t use opioids at all. He credits the turnaround to a partnership in his hometown of North Vernon. It's an unlikely partnership between a group of pastors and Decatur Plastic Products, a plastics company that makes car parts.

“Inside your car, if there’s anything plastic, there’s a chance that this is the process that was done to it,” Kent Stroud, one of the pastors who helped Ritchie, says during a tour of the factory.

Years before, Stroud and some local pastors would walk the factory floor once a week and counsel workers with anything they wanted to talk about. One of the owners, Robert Riley, says pragmatically it was an easy way to combat a high employee turnover rate.

"If we can’t help the community in which we operate and the community erodes, then the business is going to disappear,” Riley says.

But outside the factory, pastors kept watching families in North Vernon struggle with opioid addiction. It was derailing people’s job and housing.

So Stroud got the pastors together one day to pitch a novel idea: What if Decatur Plastics donated the money for a supervised house for former drug users and then employed them at the plastics factory? Deactur Plastics agreed the very same day.

"It was a very easy decision for us because this was a community that really needed it," Riley says.

So the pastors purchased house and called it The Potter’s House. Stroud made a deal with a local judge and prosecutor to allow an inmate to live at the house on probation with a life coach. They reluctantly agreed since it would free up jail space.

The next thing they needed was their first participant, so Stroud went to the county jail where he met Ritchie.

“I was just like, man, I’m in trouble," Ritchie says. "It’s gonna be awhile before I get out.”

Stroud laid out the plan to Ritchie. If he accepted, he’d spend a year at The Potter’s House while working full-time at the plastics company. The spotlight would be on him and if Ritchie relapsed or went back to jail, it could kill the whole program before it even really started.

“I knew this was my second chance,” Ritchie says. “So, pretty much said, I’m your guy. I promise I’ll make it all the way through there.”

Ritchie moved into the house and after a few months with no major problems, a few more inmates came. Stroud says a large part of their success came when people were able to put a face to the opioid crisis. It helped the community tackle a huge, nationwide issue by focusing on one person at a time.

“This is only one small house and this is only one employer," Stroud says. "But in a community, it brings hope. And to a problem, it brings real people. And so it doesn’t just affect Zach. This has had an impact on grandma and grandpa and mom and dad and now fiancé and baby. That’s a big chunk of our community.”

Now, Stroud estimates about one in every 10 employees came through some type of second-chance program. Decatur Plastic Products also started a work release program for women inmates in nearby prisons.

Human resources director Karen Lea-Freeman started that program, but was told the company couldn't afford to donate another house. She says until she can funding somewhere, it's an uphill battle to help those female inmates.

“We’re not setting them up for success," she says. "We’re getting them a job, but what happens when they get out of jail and they don’t have a place to go to?”

Rachel Halleck focuses on addiction programs at Indiana’s Family and Social Services Administration. She says often people recovering from addiction need to fulfill basic needs like housing and a steady job - things they may have never had before in their lives.

“It’s an incredibly monumental task,” she says. “So for organizations to come in and help with housing stability or employment or employment training or education – any one of these helps give a leg up to a person that’s attempting to rebuild their life.”

With unemployment rates at historic lows and available workers hard to come by, more companies might start looking at those who need just a little bit of help to get back into the workforce.