What's The History Of The Jordan River? 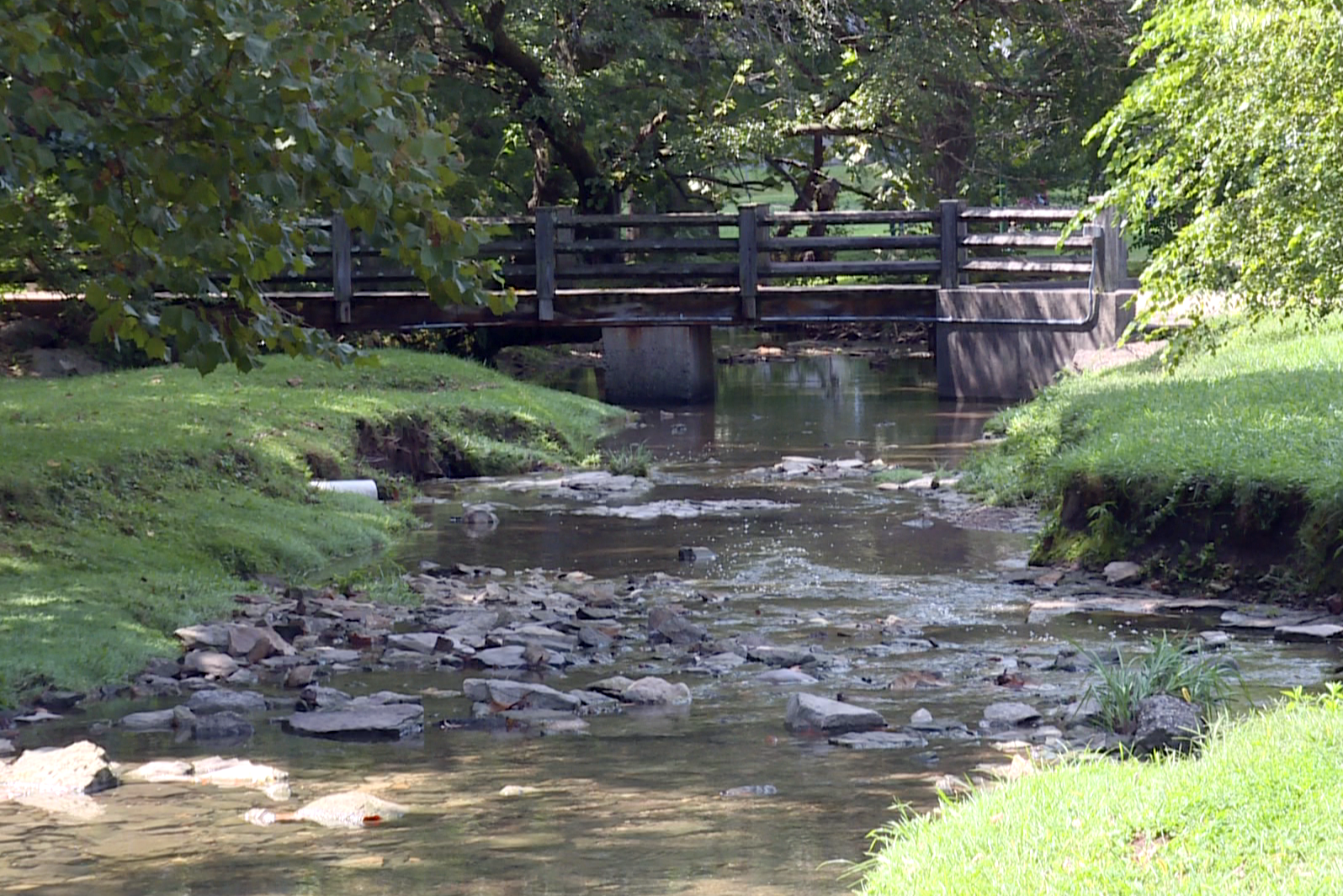 Laurel Bender has been taking walks along the Jordan River for close to 30 years.

In August of 1990, Bender moved to a house on North Park Avenue in Bloomington with her son, Joe, and husband, Alan.

As new parents with a toddler, the Benders were looking for a place to be active with Joe. They looked about two blocks south and found a small creek running through the Indiana University campus. Joe loved it. Soon enough, Dusty the dog joined the family, and the Benders were making consistent trips to the Jordan.

Now, Joe is 30 and lives on his own. And the black and white cattle dog Zoe has taken the place of old Dusty. But Bender still spends time walking along IU’s meandering landmark, which has often led her to wonder, “What’s the history of this little river?”

She asked City Limits to find out.

“I guess the main thing I was curious about is why our little river is routed underneath the city, starting at the east edge of the campus at Sample Gates,” Bender said.

The first thing to know about the Jordan is that it was not originally named the Jordan River.  Originally, back in the 1800s, it was called Spankers Branch. But it’s unclear why.

Some accounts have it as an eponym for someone with the last name “Spanker,” while others say it’s because mothers would spank their children for playing in the stream.

Spankers Branch became the Jordan in the late 19th century, when former IU President David Starr Jordan left the university to become the first president of Stanford in 1891.

According to IU Historian Jim Capshew, the board of trustees wanted to honor Jordan by naming a building after him. Jordan felt that a building was too much and quipped that he would rather have the little creek on campus named after him.

“That was more of an informal thing,” Capshew said. “There is no record of it in the trustees’ minutes and things like that. But eventually people started calling it the Jordan River, rather than Spankers Branch, sometime by the 1920s.”

At the same time, Bloomington began seeing tremendous population growth. At the start of the decade, there were 11,595 people living in Bloomington. By 1930, that number jumped to 18,227.

Records show this was when the city began enclosing parts of the Jordan – presumably to help create more room for a rapidly expanding city.

The portion of the stream on IU’s campus was left untouched, though, for all to enjoy. And for a long time, it was best to look and not touch.

Since the Jordan is such a small, slow-flowing stream, it’s easier for bacteria and other microorganisms to thrive. By the time of the environmental movement, the Jordan had developed a reputation as a lovable but dirty stream.

“I know that back during the first Earth Day in 1970, there were these tours to show the Jordan as this polluted stream,” Capshew said.

By 1978, researchers discovered a unique species of Legionella there, which they named Legionella jordanis.

There’s another reason it’s wise to stay out of the water.

Back in 1993, an IU student was playing in the river after a heavy rain and was sucked into a storm drain before reemerging three-quarters of a mile downstream on the southwest side of town.

“When we looked at the walls and things like that, there was all kinds of steel bars and rebar and all kinds of obstructions,” Capshew said. And the circumference of the tunnel is not that big, so this guy was lucky he did not get hung up.”

When the river reemerges at the corner of Walnut and First, it becomes Clear Creek and passes through the developing Switchyard Park.

Laurel Bender also wanted to know the plans for the river when it gets to the new city park. Specifically, she wondered whether the river would be rerouted.

According to Dave Williams, Bloomington Parks and Recreation operations and development director who is overseeing the project, the stream at that point will be opened up and become more of a focal point than an underground afterthought.

“We wanted to make it a public feature, an environmental feature,” Williams said. “So, we’re basically bringing Clear Creek back to life through the center of the park. We have a very large wetland basin we’re creating that will daylight Clear Creek instead of being in a culvert under the property.”

Williams added that if things go according to plan, part of the park will be open to the public this November.

“It’s interesting 100 years later communities are realizing the environmental benefits – just the public quality of life benefits – of bringing that water to the surface,” Williams said.

As for the portion on campus, the university just spent about $2 million to renovate the river.

About $1 million was used to rehab the river’s banks – getting rid of invasive plants and replacing them with native species in an attempt to slow down erosion.

IU spent the other million on renovations at the corner of Seventh Street and Woodlawn Avenue. The Jordan flows underneath that intersection.