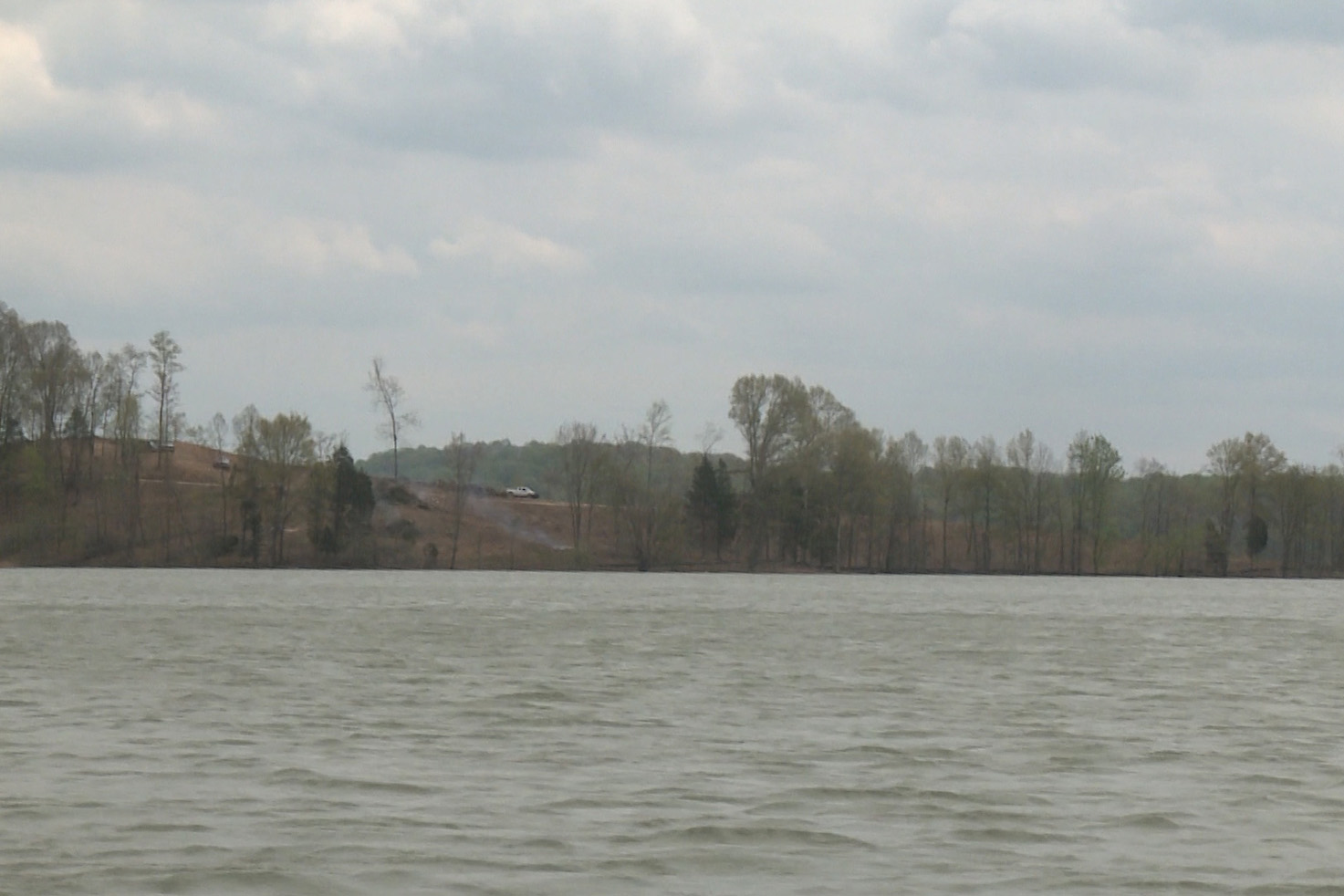 Logging activity at the Huff property is visible from the water. (Barbara Brosher, WFIU/WTIU News)

As a dispute between neighbors over logging on private property near Lake Monroe makes its way through the court system, some are alarmed by how the action is changing the lakefront's landscape.

The Indiana Court of Appeals reversed a preliminary injunction last month that prevented Joe Huff from using easements shared with a nearby subdivision for logging on his land. Huff owns nearly 250 acres near South Shady Side Drive. His attorney says Huff is selectively logging the land to eventually develop it into a home site.

People who live nearby say their quiet neighborhood is anything but lately. Neighbors say they've routinely seen large logging trucks come from Huff's property, which is at the center of an ongoing controversy over private property rights and environmental concerns.

"There is some concern this is really a development that's being disguised as logging," says Sherry Mitchell-Bruker, president of Friends of Lake Monroe.

The advocacy organization's been doing water clarity monitoring near the Huff property for about two years because of concerns about the potential sediment runoff and erosion logging can cause.

"That sediment carries with it nutrients, and those nutrients feed algae," Mitchell-Bruker says. "And algae is one of the problems we have on the lake, especially blue-green algae."

Mitchell-Bruker says the high water levels at the lake make it hard to determine the impact of logging at the Huff property.

Huff hired a company that started harvesting timber in 2018. But, neither he nor Tri-State Timber recieved a logging permit from the county.

State law only allows counties to regulate natural resource development on private land in what’s called an “urban area.” That means anywhere where there are at least 8 residences within a quarter square mile.

Monroe County's planning department says a portion of Huff’s land does meet that definition. But Huff's attorney says crews aren't logging on the northeast corner of the property.

"In the area that Mr. Huff has had logs cut and cut to be removed is all outside the urban area, so it doesn't require a logging permit," Attorney Thomas Malapit says.

Planning Director Larry Wilson says the logging going on at the Huff property far exceeds what was initially proposed in the permit applications. And, he says crews aren't follownig many of the Department of Natural Resources Forestry Best Management Practices. But, state statute limits the county's ability to enforce regulations that Wilson says protect the lake.

The Army Corps of Engineers owns the lake and the land up to a certain point, and property owners can't harvest timber past that line. The Army Corps says it's sent a surveyor out to the Huff property multiple times and there haven't been any violations.

That doesn't make neighbors or lake advocates feel any better.

"There are people who have private property who have certain property rights, and we understand that," Mitchell-Bruker says. "And what we would like to see is that at least at a minimum that they go through a permitting process that ensures they use the best management practices and do everything they can to limit the impact on the lake."

Some neighbors are suing Huff because they say he's violating a use-of-easements agreement that prohibits using them for commercialized logging. Their attorney wants the Court of Appeals to rehear the case.

Huff's attorney says the legal dispute is delaying work on the property and costing his client a lot of money. When the preliminary injuncton was still in place, Huff couldn't remove timber from his property.

"There was over 800 logs there cut and were sitting ready to be harvested and hauled away and when you cut logs like that if they're not stored in water, then they deteriorate, and there's all kinds of damage as a result," Malapit says.

Malapit says they have video and photos of some neighbors trespassing on the Huff property.

"It's just unfortunate that you have a property owner who intends to do right on his own property and then  you get a few neighbors and you get the county meddling in with civil matters," he says.

The Monroe County Legal Department says it has received a complaint and photos of two structures on the Huff property. County Attorney David Schilling says the structures require an Improvement Location Permit, which hasn't been requested.

Malapit says he doesn't believe a permit is necessary because the shed and gazebo don't have foundations and therefore aren't permanent structures.