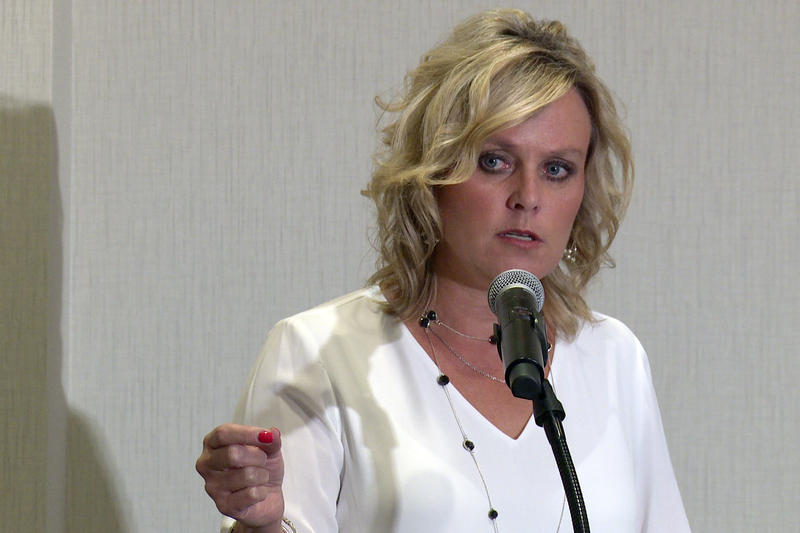 Indiana Superintendent of Public Instruction Jennifer McCormick says the local response from school districts to support Indiana’s more than 1 million K-12 students learning from home is taking shape but the disparity in funding is emphasizing inequalities.

School districts are struggling to provide robust e-learning options to families. A reason some can not, she says, is inadequate state funding.

“So for us to expect those districts who are fiscally strapped to have a lot of money or capacity for device, or access or professional development, or tech integration positions or coaches is just not realistic,” McCormick says.

McCormick spoke to the media during a live video stream Tuesday. Reporters were asked to submit questions in advance. No questions from the media were taken during the stream. Instead, McCormick spoke for 45 minutes and touched on more than a dozen topics facing students, teachers and schools across the state as they grapple with remote learning and the uncertainty of how and when buildings will reopen.

Here are some major takeaways from McCormick’s comments:

Gov. Eric Holcomb’s executive order required schools to submit a continuous learning plan by April 17 to qualify for waivers to reduce the days of required instructional days. The plans should detail an e-learning or other type of remote curriculum. McCormick says plans were received from 97 percent of traditional public schools, 90 percent of charter schools and 99 percent of private schools that accept tax-payer funded vouchers.

“We have over 500 that have been turned in and returned. We have just about 50-ish that were returned back to say, ‘you know what, you need a little bit more meat to that.’ And then we have some that just were struggling — about 11. So very, very few in the state of Indiana that we just can't get the link or communications or it's, those are the outliers,” McCormick says, adding that 200 plans are still under review.

Just 25 percent of schools used some type of e-learning program for snow days and other short-term in-person teaching gaps before the COVID-19 crisis.

McCormick says most school districts are now struggling to ratchet up the ability to offer online classes as they face lack of equipment, experienced technical staff and students without devices or internet access at home. That means, “continuous learning is all over the place” as some schools rely on paper-and-pencil work packets.

READ MORE: Can I Go For A Walk? Here's What The Updated 'Stay-At-Home' Order Really Does

“The quality of it, that we know, we have some work to do. But a lot of that is dependent upon the professional development that's available, leadership, the buy-in from the teachers, the buy-in from the community, and the buy-in from the students," McCormick says. "For us to expect students to be ready without ever having used that mode of learning before — although they are very tech savvy — doesn't mean they are good tech learners.”

Fiscal Concerns For Summer School And Beyond

Indiana’s tax revenue, which is used to fund schools, came in about $63 million less last month than the state budgeted for. McCormick says she’s not heard talk for reduced per-student funding in the 2020-21 school year but “I’m realistic to know we're going to have some fiscal concerns as a state, all states are going to have it.”

For now, summer school funding is a concern.

“We've not heard of any cuts to our summer school, but our current state allotment is $18.3 million. Last year, we had a $22.7 million request. So we were short last year. We know we're going to be short," McCormick says. "Again, we're looking at maybe a $10 million deficit based on requests, but we just don't know we won't know until applications are in and they are due June 1.”

Graduation For The Class Of 2020

One of the biggest questions coming out of high schools is: will there be a cap and gown ceremony this year? McCormick says it’s still unknown.

“We're going to have to have the governor and the state health department take the lead of that. We're hearing mainly either a push back in the date and try to hold it in a creative way, or a virtual type of program,” she says.

More than 170,000 Indiana students, or 15 percent, receive some type of special education accommodation, ranging from one-on-one instruction to therapy for an emotional or physical disability. There’s also 72,000 students, or 6 percent, who are English-language learners.

McCormick says schools are still figuring out how to offer the services remotely even as the U.S. Education Department offers leeway.

“I'm not going to try to sugarcoat it – very tricky in the means of how do you evaluate students who need to be evaluated for placement into special services?” McCormick says, adding that she’s seen great accommodations coming from family health plans, special education co-ops and schools. “Professional development ... for special education educators, I think is going to be extremely, extremely important just because it is different. It's a different platform, it's a different approach, you have a lot of accommodations and modifications and needs have to be met.”

Federal Money 'Not Gonna Get You Very Far'

The federal CARES Act, or Coronavirus Aid, Relief, and Economic Security Act, made nearly $31 billion available for education, including $13 billion for K-12 state education agencies plus a separate funding pool for governors to distribute. McCormick’s department received nearly $215 million that will be distributed based on a formula linked to the federal Title 1 program.

"Here's the issue with that – some school districts will get $800 others are going to get $6 million. So it depends on how you fall in the Title formula," McCormick says. "I'm concerned that everybody thinks this is going to be a huge boost to our districts. Well, proportionally, that's not gonna happen. So the CARES Act ... I appreciate it for what it is but given the last district I was in, and looking at those funds, that's not gonna get you very far.”

For now, schools remain online. McCormick says educators should plan to keep using virtual or remote options for summer school and that the reopening of buildings relies largely on the governor and the department of health. In the meantime, she says schools have plenty to consider, including cleaning measures, healthcare options in buildings, and security.

"What does that look like for students and staff and families as far as: do they wear a mask to school or do they not, I mean you get into some security concerns right now with that as well," she says.

Schools are already starting to plan their calendars for the next school year and talking about different ways to bring kids back into buildings this fall.

McCormick says schools will likely need to continue to prepare additional remote-learning options in case parents decide to keep their children at home or if a second wave of the virus hits.

McCormick says inadequate internet access isn't a school issue but is being felt particularly hard by educators and families while Hoosiers are stuck at home — something the state needs to address.

"That infrastructure is just as important as I-69 being paved, or bridges being taken care of it is the way of life, we need to make sure all people, all citizens in the state of Indiana have access," she says.

Standardized tests have also been canceled this year, and McCormick says the current situation strengthens the case for Indiana to nix the IREAD-3 exam and roll it into the existing ILEARN test.