'Breaking Away' Quarry Partially Filled In: 'There Would Be 300 People Back There' 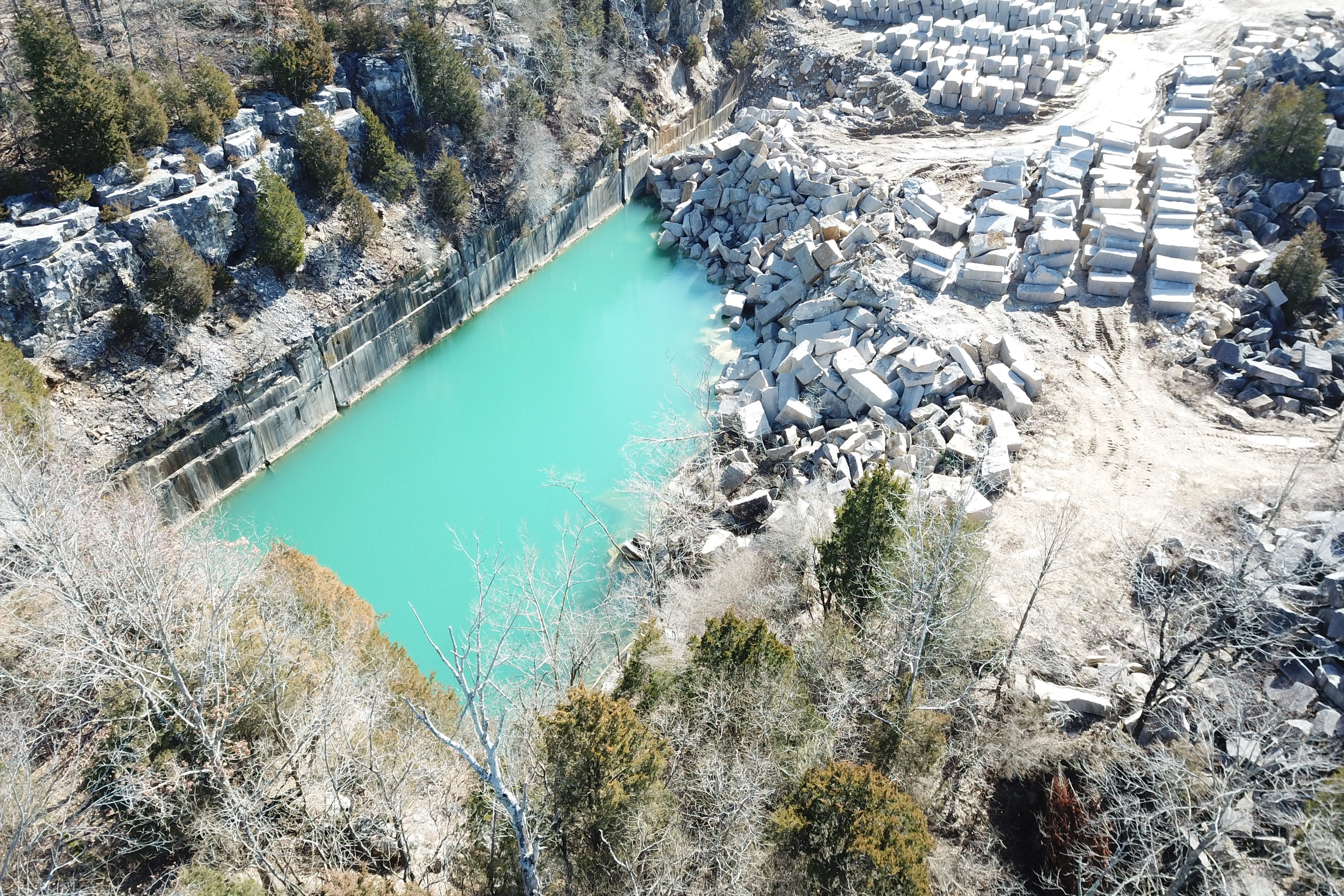 A 2020 photo of the Sanders Quarry in Bloomington. (WFIU/WTIU News)

In 2018, rumors started swirling that crews had filled in the iconic Sanders Quarry, featured in the 1979 coming-of-age film “Breaking Away." But without official word from the company that owns the quarry, Bloomington resident Tom Trent asked City Limits to find out what was going on.

Residents near the quarry say there have been issues with people trespassing onto nearby residents' property and getting seriously injured from jumping into the water.

We spoke to Laura Stolberg. Her house on the south side of Bloomington looks peaceful at the back of a subdivision, nestled in a grove of trees. The lot sat vacant for years while Stolberg worked on drawings for the perfect house for the lot.

Five years ago, construction crews broke ground. Her dream house was on its way to becoming a reality.

That's when she learned her house was going to stand on top of the main access route for college students trespassing at the quarry made famous in "Breaking Away."

"We couldn't get construction trucks in and out (of) the street because there were so many kids parked up and down the street," Stolberg says. "So, we started chasing them off and trying to get them to go elsewhere. … But they just kept coming.”

The destination? A turquoise, rectangular pool dug deep into the ground just a quarter mile beyond Stolberg’s house.

It’s one of dozens of limestone quarries scattered across southern Indiana, but this one is famous for its depiction in “Breaking Away.”

Dennis Quaid starred in the film about Bloomington’s town-gown relationship, featuring four teenage boys who spend their days swimming in the quarry -- when they aren’t tussling with out-of-town students from nearby Indiana University.

“I’m from Bloomington," Stolberg says. "So, of course I saw the movie and I do understand the appeal. But it got to the point where there would be 300 people back there on a given weekend. A lot of them were drinking. And the neighbors had their mailbox knocked over. I mean, trash was very common. Beer bottles and, and just noise. I mean, they would also four-wheel back there at two in the morning. And come on all days, all times of the day and night. So, you'd have ﬂashlights and people yelling. And it's just not what I necessarily anticipated when you see this beautiful wooded view. But I did have my concerns initially because I knew that it was an attraction; I just had no idea how big of an attraction it had become.”

It's where Dennis Quaid and the other actors lunged into the water during “Breaking Away” — including one scene in which Quaid races an IU swim team member.

It’s also dangerous. Especially when swimmers jump off an area known to locals as “Rooftop.”

In the ﬁlm, Quaid’s character suffers an injury to his face after swimming into a stone. In real life, the quarry has inﬂicted far worse injuries.

Neighbors have seen more than one person hauled away by ambulance, and several people have died recreating scenes from "Breaking Away."

“It’s just inherently dangerous with all of the rocks and people were jumping from rooftop, which is an 80 foot drop somewhere, something like that," Stolberg says. "And there have been more than one person taken away in an ambulance. And one -- I wasn't here the day it happened -- but our neighbors told us that we missed all the action, that somebody had to be airlifted by helicopter out because they've been so badly hurt that couldn't be taken out any other way.”

Quarry operators hired off-duty ofﬁcers to patrol the area and ticket trespassers. Then the operators started taking drastic measures: They bulldozed trees and other debris toward the highest ledge of the quarry in an apparent bid to discourage jumpers.

Soon after, they began ﬁlling it in entirely with large boulders and earth. WFIU obtained photos from April 2019 and viewed drone footage from this year. The images and videos show at least two-thirds of the iconic quarry is ﬁlled in.

But one bright blue corner – perhaps a third of the original site – appears no different today than it did in the 1979 ﬁlm.

It isn’t clear if the Indiana Limestone Company intends to ﬁll in the rest of the quarry, and the company has not responded to numerous calls and messages from WFIU. But the company has had some ownership changes. It merged with a Canadian company in 2018 – around the same time workers started filling in the quarry, as reported by the Herald-Times.

Monroe County Sheriff Brad Swain was on the department’s dive team in the 1990s and had to pull bodies out of the quarry. Since 1993, multiple young people have been killed imitating the teenagers in "Breaking Away.”

“I remember a young man that drowned from crashing into the rocks," Swain says. "They’re very easy to ﬁnd because unlike a river or lake, people can be off of their estimation of how far out they were. Witnesses can go, ‘He was right on that rock and he never came up.’ So, it's just a matter of going down the wall and ﬁnding them. So, recovery is pretty quick in the quarries."

Those days are mostly over; the last deadly incident at the quarry was in 2008.

Most of the injuries are associated with the so-called Rooftop area, a ledge about 70 feet high overlooking the quarry. Swain says he's convinced the ﬁlm is what draws people there.

“They would ask people as they were walking through, ‘Where’s the quarry from "Breaking Away?" The Rooftop,' Swain says. "So, a lot of people wanted to come as part of their college experience, from watching the movie."

Swain has complicated feelings about the limestone company’s decision to fill in the quarry. Like many who grew up in the area, he swam in it when he was young.

“I mean, to this day if I was there I’d still have the urge to take a jump myself," he says. "And that opportunity is no longer there."

Not everyone is convinced that shutting down the quarry is necessary.

Indianapolis-based emergency room doctor Louis Profeta remembers a study he co-authored decades ago while working at Bloomington Hospital. It was about injuries and deaths at Bloomington-area quarries.

He says a common misconception is that people drowned after hurting themselves on objects under the water. The real danger, he says, was the surface of the water itself.

Profeta says the solution was simple 30 years ago: get rid of the famous ledge.

The rock face was still standing but obstructed by trees and other debris in photos taken in April and reviewed by WFIU. Drone footage captured this week seems to show no water visible above the debris ﬁlling in that part of the site.

Laura Stolberg isn’t opposed to letting state or local authorities set up some sort of regulated way for people to access the quarry. But she says until that happens, property owners will support any effort to make the landmark less of a destination.

"We had people show up here, from out of state, wanting to walk through and access the quarry," she says. "And it's really hard to tell somebody that's driven for hours to come speciﬁcally see that quarry that no, you can't get there from here. And then they’d ask, ‘Well, how can I get there?’ And it's like, ‘Well, you know, it's all private property. So, I really, I can't tell you.'”

CORRECTION: This story has been updated with the correct spelling of Louis Profeta's name.