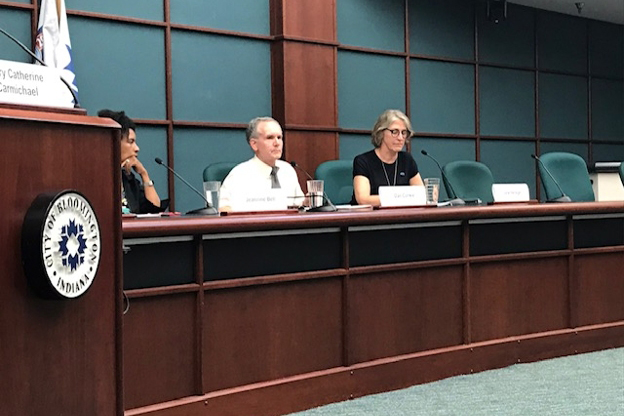 A panel of law experts echoed what the City of Bloomington has already stated; banning a farmer’s market vendor with alleged ties to neo-Nazi’s would be a violation of the vendor's First Amendment rights.

A pair of law professors, the head of the Indiana ACLU and a community organizer fielded questions from a packed city hall auditorium Thursday night.

Most in attendance asked if there was any way the city could ban Schooner Creek Farms from the public farmer’s market.

IU Maurer School of Law Professor Jeannine Bell says kicking Dye out of the market solely on her views is unconstitutional.

“Lies are protected by the First Amendment, strange but true," Bell says.

Maurer professor Dan Conkle says even if Schooner Creek was violating another law or ordinance at the market, kicking them out based just on that violation could also be unconstitutional, if it’s determined the violation is being used as an excuse to force them out based on their views.

Bloomington resident Nidhi Krishan says while she has concerns about Schooner Creek, she understands why Dye gets to stay at the market.

“Bloomington is a liberal town, but when a more conservative town uses our precedent, to just remove vendors who don’t share our views, that would be disastrous.”

Bloomington City officials say more forums on increasing diversity at the market are planned in the immediate future.