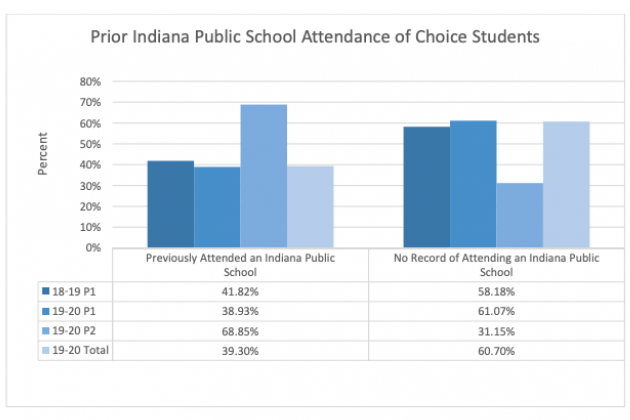 Less than 40 percent of students in the Choice Scholarship Program previously attended an Indiana public school in 2019-2020. (Indiana Department of Education)

The overall growth of Hoosier students using publicly-funded vouchers to attend a private school remains relatively flat as the cost increases, according to a just released report.

The 9-year-old program faced legal challenges after its creation. In 2013, Indiana’s Supreme Court upheld the use of public funds to support student tuition at private schools. Since then, some lawmakers have tried to change the law by not allowing schools to receive state funds if they discriminate against staff and students.

Tuesday, the U.S. Supreme Court ruled that Montana's exclusion of religious schools from a state scholarship program funded by tax credits violates the Constitution. The ruling could open the doors for lawmakers in other states to try and legislate Indiana-style scholarships that redirect public tax dollars to help cover a student’s tuition at private school.

EdChoice, an Indianapolis-based nonprofit organization that filed an amicus brief in support of the tax credits, called the court’s ruling a “victory for children and families.” Randi Weingarten, president of the American Federation of Teachers, described the ruling as “a seismic shock that threatens both public education and religious liberty.”

Vice President Mike Pence, during his term as governor, made new pathways for students to qualify for the program and opened financial eligibility to some middle class families. Under Pence, the use of vouchers tripled.

Vouchers provide 50 to 90 percent of the amount of state-funding a public school corporation receives for each student. The money is then used to pay a student's tuition at a private school.

A student must also qualify for one of eight pathways, or tracks, to receive a voucher, such as a sibling attending a private school. The track for students who are attending an F-rated school makes up only 0.7 percent of recipients.

Now, 3.19 percent of all Indiana students use a scholarship to attend a school. Traditional public schools make up 88 percent of enrollment.

For the first time, last year, a law allowed for students to enroll in the program during a second-semester application period. That allowed 459 additional students to receive a scholarship.

Without the enrollment extension, last academic year, would’ve been “the first time in Choice Scholarship Program history, the number of participating students decreased,” according to the report.

The Choice Scholarship Report, released by the Indiana Department of Education, details the slow growth of the program in recent years.

Enrollment increased by just 7 percent in the past four years. During the prior four year period, between the 2012-13 and 2015-16, enrollment surged by 258 percent.

The five private schools with the most students in the voucher program this year are split between Allen and Marion counties. Bishop Dwenger High School in Fort Wayne is at the top with 448 students and Cardinal Ritter High School is second with 434 students.

Here are some other findings from the 2019-2020 Choice Scholarship Program Annual Report. Of the students who received a voucher: