Indiana Education PAC Not Endorsing A Candidate In Race For Governor 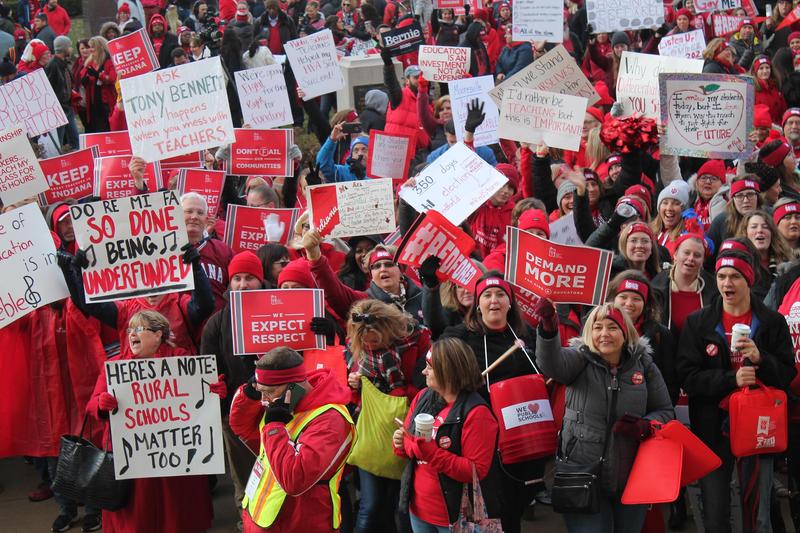 The Indiana Political Action Committee For Education is the political arm of the state's largest teachers union, which helped plan a massive rally of teachers at the statehouse last November. (Lauren Chapman/IPB News)

The political action committee tied to the largest teachers union in Indiana is not endorsing a candidate in the race for governor.

The Indiana Political Action Committee For Education, or I-PACE is the political arm of the Indiana State Teachers Association. In a statement last week, I-PACE says it won't endorse any candidate running for governor like it usually does.

Instead, ISTA President Keith Gambill said I-PACE will support teachers running for seats in the General Assembly. He said lawmakers have acted as a "roadblock" for positive change in public schools.

"So we've decided to focus our limited financial resources in this election to those races," he said.

Gambill said I-PACE will offer financial and volunteer resources for teachers running campaigns around the state.

But the decision not to endorse anyone for governor comes at a critical moment for the future of education in the state. The winner will choose who leads the state department of education for the first time, after current Superintendent of Public Instruction Jennifer McCormick leaves office next year.

It's something Gambill says gubernatorial candidates need to talk more about in order to win teachers' votes.

"To really lay out: what do they see the position being, and what qualifications are they going to be looking for in the person they seek to do this work," he said.

In May, the president of the American Federation of Teachers' Indiana chapter publicly stated support for Democratic candidate Dr. Woody Myers.

As of Monday, none of the candidates for governor have yet revealed who they would consider for the position of education secretary.