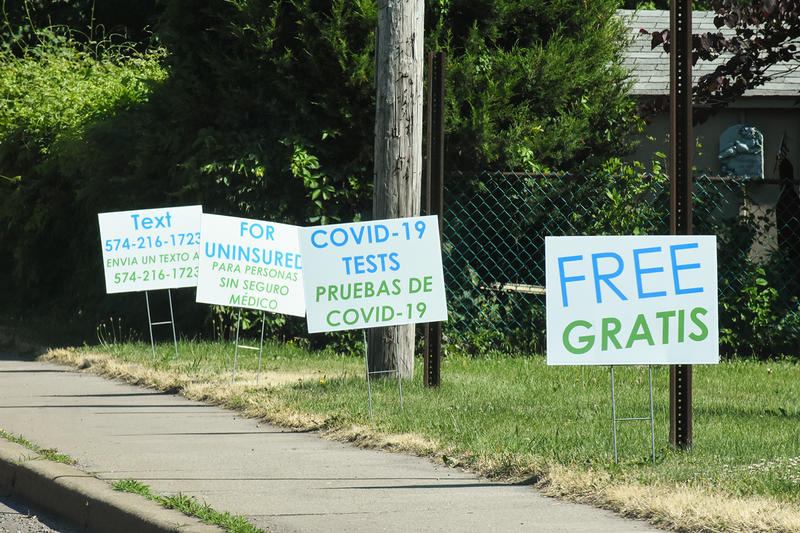 In the last week, the state reported nearly 71,000 people had been tested for COVID-19. (Justin Hicks/IPB News)

The Indiana State Department of Health reported 79 additional confirmed deaths over the last week, bringing the state’s total to 3,003. The state announced nearly 86,000 total confirmed cases – including two days with more than 1,000 reported cases – and more than 977,000 Hoosiers tested.

The Department of Workforce Development is requesting access to funds from the federal government to give unemployed Hoosiers an additional $300 a week, but it will only go to those receiving $100 or more in benefits.

The Lost Wage Assistance Program will be available for out of work Hoosiers backdated to Aug. 1. Federal guidelines say workers must have received benefits of at least $100 under state or federal unemployment programs to be eligible.

DWD Commissioner Fred Payne said, unlike other recent unemployment programs, the money doesn’t come from the U.S. Department of Labor. Therefore, it could take somewhere between two to four weeks to start making payments.

Indiana's Unemployment Rate Drops By 3 Points, So Does Labor Force

For the month of July, Indiana’s unemployment rate dropped more than three points from the previous month down to 7.8 percent. But that metric is only a rough indicator of how the economy is improving.

A federal judge won’t force Indiana to expand vote-by-mail for this fall’s election.

A group of Hoosier voters filed a lawsuit against the Indiana Election Commission after Republican commission members refused to allow any Hoosier who wanted to vote by mail to cast a ballot that way for the 2020 general election.

The commission did expand vote-by-mail for the June primary, due to the pandemic.

Judge James Patrick Hanlon ruled that while the Constitution guarantees the right to vote, it does not guarantee the right to vote by mail. And he says the voters who filed the lawsuit couldn’t prove that they would be blocked from voting at all if vote-by-mail wasn’t expanded.

On the first day back to school at Fairview Elementary, Tami McMahan's classroom sits empty. The only students you'll find in here are on a screen.

"This year, I will be servicing third grade remote kids, all via an online platform," she said.

McMahan's role looks a lot different this year. She's an English Language, or EL, interventionist. Usually, she works with kids who don't speak English as their first language.

"Last year I serviced our newcomers, and those are students that were refugees from Guatemala, El Salvador, Honduras, and they would come to a special class for two hours a day and we would do instruction on how to, you know, just the introduction of school," she said.

The district has gotten into a rhythm working with all kinds of non-native English speaking families over the years. Nearly a third of enrolled students don't speak English as their first language.

But Cass County had one of the largest outbreaks in Indiana at the start of the COVID-19 pandemic, and it changed everything.

The district pushed the start of school back by nearly a week after initially planning to reopen Aug. 12. A school survey over the summer showed about a dozen families interested in learning online; after registration, nearly 600 kids enrolled in online classes.

Gov. Eric Holcomb is pitching an idea to calm concerns about school funding, but school leaders are doubtful it will truly clear up the problem and say it could make things like navigating teacher pay even more challenging.

Holcomb's plan would delay when students are counted, something he said would keep funding stable through the fall. His suggestion comes after a top lawmaker warned schools of possible cuts if they only offer online instruction this fall.

Martinsville schools are starting online, but Superintendent Jay Arthur says, student enrollment and the funding it determines also shapes other critical school decisions that rely on the budget – which means delaying the student count day could make things like teacher pay complicated.

"How do you negotiate something that you don't know and don't have a final answer on?" he said.

Indiana will soon send a total of $61 million to Hoosier schools to help them with their technology needs during the COVID-19 pandemic.

The awards announced Wednesday will go to 1,366 schools, the vast majority of which are traditional public schools.

The grants from the previously-announced program are funded by the federal CARES Act. They will pay for, among other things, more than 68,000 student devices and nearly 2,900 devices for teachers.

The Hoosier Lottery generated more than $300 million for the state in the last fiscal year, which supports teacher retirement and police and firefighter pensions.

That revenue meets budget projections, despite the impact of COVID-19.

Lottery officials were predicting a revenue shortfall as recently as May. But the Hoosier Lottery just barely cleared its budget goal – about $212,000 more than projected.

That’s in part because the state surpassed $1 billion in scratch-off sales for the first time ever.

Lawmakers Begin Recommending Changes To 2021 Session For COVID, But Short On Specifics

A panel of Indiana lawmakers is beginning to recommend changes to the 2021 session to adjust to the ongoing COVID-19 pandemic. But some of the initial recommendations made Monday are short on specifics.

One of the committee’s first priorities was how to adjust Organization Day – a technical meeting of the full legislature in mid-November. Typically, it’s for swearing-in lawmakers after the elections and making speeches about the upcoming session.

But this year, it’s likely the General Assembly will make major changes to state law and their rules on Org Day – to, for instance, allow legislators to vote remotely, if necessary.

Rep. Ed DeLaney (D-Indianapolis) said it’s important not to rush those changes through, even though any such bills would be passed on that single day.

“I would hope there’d be debates or discussion so that we and the public can understand what we’re doing to the system,” DeLaney said.

The Indiana Postal Workers Union says mail carriers are disturbed by recent delays in delivery times as a result of national postal service policies. The union is urging Congress to give funding to the United States Postal Service.

“It’s demoralizing because we are in a culture that delivers every piece of mail: every package, every day,” he said. “When we’re told you have to delay the mail it’s upsetting for postal workers. We want to deliver for America.”

Simon Reportedly In Talks With Amazon To Fill Vacant Space

Indianapolis-based Simon Property Group is reportedly in talks with Amazon to use vacant space in its malls across the country. The recent news comes as several of Simon’s anchor tenants have filed for bankruptcy.

The coronavirus pandemic hit traditional mall retailers especially hard the past few months causing an uptick in bankruptcy filings, including JC Penney, as companies struggle to pay the bills including rent.

Simon Property Group is the largest mall operator in the U.S. It reported lower earnings in the last quarter in part due to tenants struggling to survive.

John Talbott, Indiana University Kelley School of Business Center for Education and Research in Retail director, said anchor tenants didn’t necessarily pay top dollar for the spaces they occupied, but rather made their value by helping to draw people to the malls.

“Simon wanted them to be part of the mall because they drew all the other customers in, you know, that's been the historic model,” said Talbott. “I think recently, that model has been broken for a while, the anchor entities just aren't drawing traffic at the same level, as they have in 15 years ago.”