E-Learning And COVID-19: Juggling Parenting And Teaching In A Pandemic 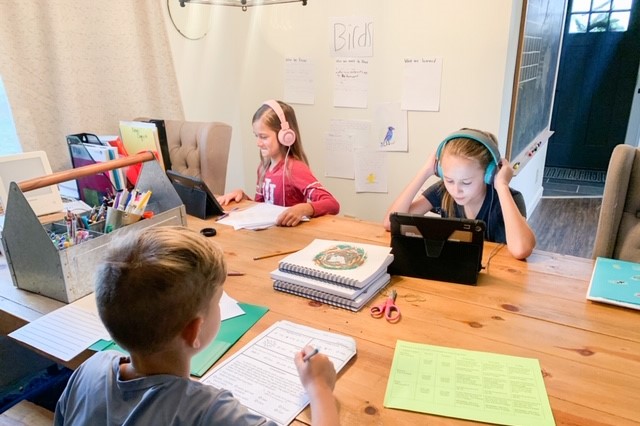 The Clampitt siblings participate in e-learning from home. (Courtesy of Abra Clampitt)

Abra Clampitt owns Gift of Today Photography. She and husband Andrew Clampitt have a sixth-grader, fourth-grader and third-grader she has been homeschooling since the shutdown.

She says she stopped her photography work in mid-March. Then the stay-at-home order was put in place and only essential workers could work, so she didn’t shoot for nearly two months.

“I kept rescheduling sessions over and over in hopes I would be able to start work again,” she says. “I had newborn sessions I couldn’t do, graduations, birthday milestones, and two weddings that were even rescheduled. I have since started shooting again at the beginning of May with safety precautions in place.”

Andrew is the director of communications for a neighboring school corporation and continued going to work as scheduled.

Abra says in some ways it has been nice to have him still working outside the home, as it keeps a sliver of normalcy in their lives.

Abra says she was stressed when she couldn’t shoot photo sessions and that income abruptly stopped.

“We stopped spending any extra money at all and adapted our budget," she says.

Abra says while the transition has been difficult for the whole family, she applauds her children's teachers at Lakeview Elementary who switched to e-learning essentially overnight.

But her kids have missed their friends, classmates, teachers, and the rhythm of school. She says there was an adjustment period, but with the school’s help and her desire to give them the best go at this new way of learning, the school year ended great.

“The key was to lower expectations, focus on connecting with my kids, and I implemented some rhythm in our day to give us all a little more ease and expectancy,” she says. Teachers recorded videos to share and connected to her kids through Zoom calls.

Abra says to keep family sanity, she created a schedule for their day, but it was adaptable, and she wasn’t rigid with time.

“The rhythm really helped us all to know what to expect, and lessened the question of, what’s next?” she says. “This schedule is to help our day flow, but by no means does it make our day perfect or without redo moments and frustration.”

A former teacher, Abra added some hands-on activities to the e-learning.

She says her oldest was independent, which allowed her to focus on the younger two. She says they mainly sat at the dining room table together, but she allowed her kids to move to their beds, couch, floor or porch if they wanted a change of scenery. She incorporated creative work for each child – clay sculpting, painting, science experiments, etc.

“After lunch we had ‘recess’ then moved on to chores and a read-aloud by me and then independent reading in their rooms,” she says.

She says she would let them pick a technology – either TV or an iPad game - for an hour as they neared dinner time. She encouraged the kids to help with dinner and they do a bunch of baking.

Abra says the family’s summer plans have changed a lot. She keeps things in perspective, acknowledging what they are missing isn’t a big deal considering the hardships of the pandemic. Still, she’s disappointed she and her husband had to cancel a trip to Mexico for their 15th anniversary and the kids will miss the family’s yearly overnight camping trip.

She says she thinks this pandemic has given people time to reflect and evaluate their priorities. As hard as this time has been, there is freedom to think and to consider what’s next.

For her, the time at home has reminded her how much she loves to teach. She says she loves photography and the creativity that comes with it, so she’s not sure she would ever give that up. But she’s equally passionate about teaching, so she hopes to somehow do both.

She says now that school is done, her kids know she needs some work hours throughout the day and have been pretty good respecting that.

“I’m thankful I have a flexible work schedule during the day that I can stop and take them for a hike and finish up work late at night or early morning, which I have been doing lately,” she says

LeeAnna Powell and her husband Eric own several local businesses, including The Funeral Chapel, My Sports Locker, and the Bloomington Moms Blog. They have five children, one grown that lives in Ohio, one in college in Tennessee, two at Bloomington South, and a second-grader at Childs.

MORE ON PARENTING AND COVID-19: Co-Parenting During A Pandemic: Balancing Quarantine And Custody Agreements

Powell says her husband was home a lot more than normal early in the stay-at-home order. His work as a funeral director was slowed with families not having visitations in the evenings.

“During the day he would go into the funeral home and I was home with the kids,” she says. “Somedays I found times between schoolwork times to return phone calls and emails but honestly it was a struggle some days to keep up, along with food daily for all the family.”

She says early in the home learning she tried to get her kids all up and started by 9, then quickly realized it wasn’t best for them all to be doing work at the same time because of internet speeds and overall noise.

“After a week we started with elementary work by 9:30, the older kids would begin about 11,” she says.

Powell says her son wasn't planning to come home this summer from college but was home on spring break when the shutdown began.

“He's now been forced to come back home and stay for the summer and work here in town,” she says. “He's never taken an online class and adjusting to him being home while siblings are doing school at the same time was an adjustment.”

For her two high school students the teacher engagement was different depending on the class. She says they were able to ask teachers questions and get answers quickly.

“This really helped him stay and feel connected,” she says. “He looked forward to the calls each week, they would play a game, read a story together and have a sharing time. During all of the online learning he went from not wanting to read to starting a chapter book series with encouragement of his teacher …”

When it comes to their family’s plan for the summer, Powell says, “Summer camps were canceled making us rethink how we are going to work if the state/county opens back up.” She’s crossing off much of what was in her calendar, replacing the items with Zoom calls or nothing.

She says she has enjoyed their time together as a family at home.

“Our home-cooked meals have brought us around the table each night,” she says. “We've had lots of time playing games together as a family and going on walks with the dogs.”