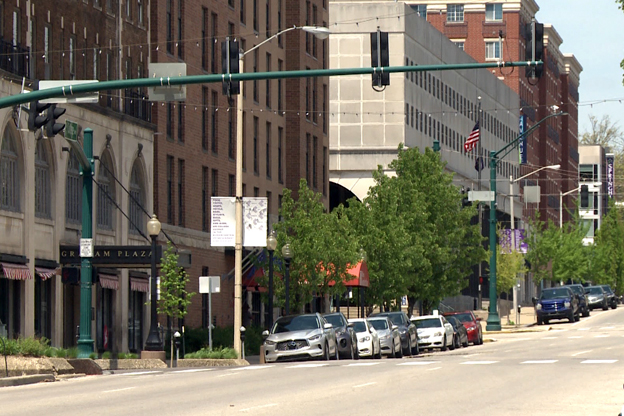 The head of the American Hotel and Lodging Association says half of the hotels in the U.S. could close because of the ongoing coronavirus pandemic.

The two biggest hotels in Indianapolis suspended operations more than a month ago. And in college towns across the state, hotels are missing out on one of their biggest money making times of the year – graduation season.

The pandemic has caused an 80-percent drop in hotel bookings nationwide. Visit Bloomington Executive Director Mike McAfee says within a few blocks of the courthouse square are about 700 hotel rooms.

"Normally right now the square down here would be hustle and bustle and all kinds of people out for lunch and, and doing their business activities and, and all the stuff associated with the university,” McAfee says.

Tied to that is a big part of the economy. Visitors spend $400 million a year in Monroe County. The tourism industry employs 6,800 people.

"We have one of the most vibrant culinary scenes in the Midwest with all of our restaurants and the local restaurant scene and all the independents," McAfee says. "And so much of that, again, is sparked by that economic activity that's created by the students and all the business activities that go with that."

McAfee says out of the 2,500 rooms in Bloomington, only about 500 are booked a night on average.

Mike Fierst owns the Showers Inn Bed and Breakfast just a couple blocks from Bloomington’s downtown square. He had no choice but to close and offer refunds to guests.

“We're just kind of waiting to see what's going to happen. We've had a few people have called sort of booking for August, September, October.”

Fierst says they’re able to keep their employees due to the Paycheck Protection Program. Most of them are busy cleaning while they await guidelines on how to reopen… when that time comes.

Fierst says they’ll have to make other modifications such as installing a Plexiglas screen at the front check-in desk. But those things are easy he says… compared to the challenge of convincing people that it’s safe to stay at hotels again.

“In order to be successful you have to plan ahead and there's no planning ahead necessarily other than those things that are obvious in terms of you know, distance, cleanliness.”

Fierst says patience is hard with a staff and empty rooms. McAfee says they’re all in the same boat.

“It'll be working with our partners, all the hotels and attractions and members of the hospitality industry, to make sure we have our infrastructure set up that we are where we are a safe destination,” McAfee says.

Indiana Gov. Eric Holcomb is relaxing restrictions under the statewide stay-at-home order that first took effect March 25 on Monday. His five-stage process gets Indiana back on track by July 4.