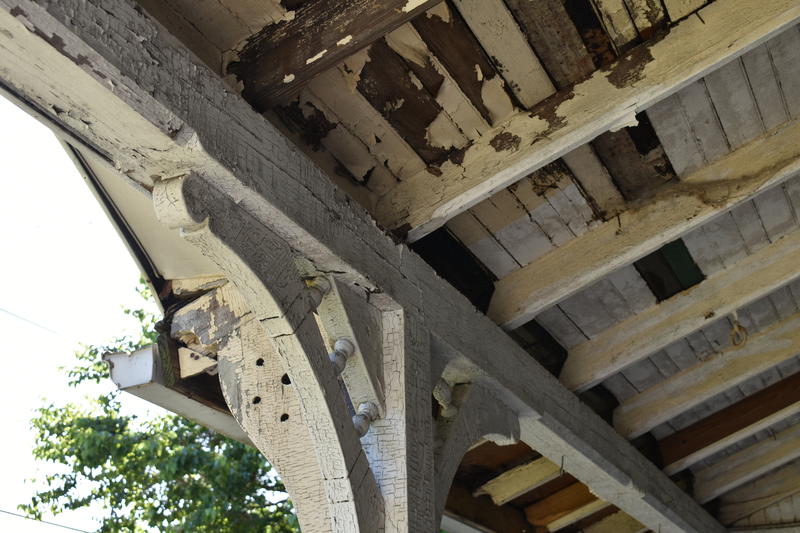 Lead paint flaking off of a porch, 2018. (Ich/Wikimedia Commons)

A large coalition — made up of doctors, legal experts, advocacy groups, and others — is petitioning the state to lower its threshold for when public health agencies should address elevated blood lead levels in children.

Right now Indiana’s required threshold for many services is 10 micrograms per deciliter, twice as high as what the Centers for Disease Control and Prevention recommends.

“This petition will go a long way in making sure that we catch the majority of the disease burden, which is actually the lead levels between five and 10,” says Dr. Tony GiaQuinta, president of the Indiana chapter of the American Academy of Pediatrics.

In 2016, more than 1,600 children tested for lead had levels at or above the CDC’s recommended threshold but below the state’s.

Kids with lead poisoning can have trouble learning, behavioral issues, and poor kidney function. Mark Templeton is the director of the Abrams Environmental Law Clinic at the University of Chicago Law School. The clinic works with East Chicago residents affected by lead.

He says he knows one child in the area who had elevated levels of lead in his blood below the state’s threshold. Templeton says he now has attention deficit disorder and other issues.

“A level of five would have led him to getting the kinds of services and interventions which would have helped him earlier and had a significant impact on his life,” Templeton says.

Marion County already uses the CDC’s lower threshold. Daniel Fries with the county’s health department says it’s allowed them to help more of the community — and not just the kids who have lead poisoning today.

“Because we're going in and doing home assessments and inspections for all of these cases, we're hopefully addressing all the lead issues for anyone that may come down and move into that home down the road,” Fries says.

The Indiana State Department of Health didn’t make anyone available for comment, but the agency did provide a statement:

ISDH has been engaging in discussions about the resources needed to lower Indiana’s lead threshold to five statewide. That isn’t as simple as just changing a number because of the varying resources that exist among local health departments and because there is no one-size-fits-all solution. We are having ongoing discussions with partners and other states about what approaches to case management would work best in Indiana; we also are forming a lead advisory group to help develop a plan to move forward.