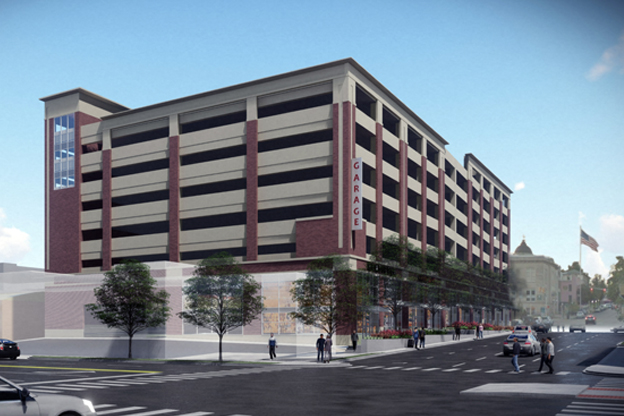 The city of Bloomington is moving forward with a fourth street garage plan on its current footprint.

“We need this garage. It’s not a new garage, it’s a replacement garage. And as the case has been made, we’ve been out it for 14 months now and it is hurting.”

President of the Bloomington Economic Development Corporation (BEDC), Jennifer Pearl was also strongly in favor of the garage. She says it will allow commuters and the people of Southwest Indiana more accessibility to downtown.

Previous plans for the garage called for a structure that stood six stories tall with 352 parking spaces. It also took up more real estate.

The original plan tried using eminent domain to claim more land south of where the old garage was, but a judge denied the proposal and ruled in favor of property owner Juan Carlos Carrasquel.

The increase in height and number of parking spaces was a major concern of councilwoman Isabel Piedmont Smith. She isn’t on the planning commission, but spoke during the public comment portion of the meeting.

Other members of the public were also troubled by the increase in spaces as well as the overall proposal.

“I think this is going to turn into a 50-year commitment to using fossil fuels,” Bloomington resident Tim Clark says.

Bloomington’s director of Economic and Sustainable Development, Alex Crowley, says the city will be following the guidelines of SmartPark, a company that certifies sustainable parking structures based on multiple characteristics. He believes the new garage should strive to attain SmartPark’s Silver status.

Crowley says some of the green-initiatives in this structure will be 10 EV charging stations, space for at least 50 bicycles and solar panels.

The project will be funded through a $18.5 million bond issuance approved by city council last year. The city says construction could begin as soon as August.