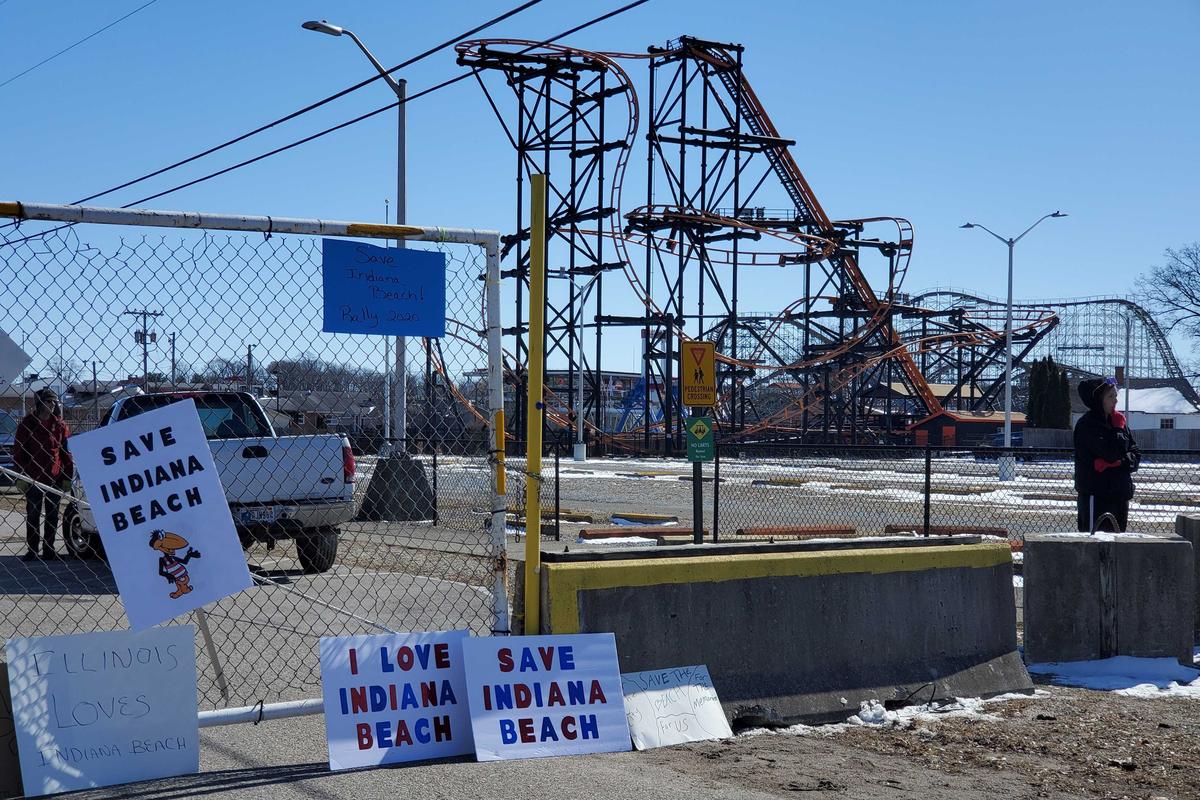 Signs left outside the main gate to Indiana Beach during the rally to save the amusement park in March. (Samantha Horton/IPB News)

A Chicago businessman has bought a northern Indiana amusement park that abruptly closed in February and hopes to reopen the 94-year-old tourist destination’s rides and other attractions this summer if coronavirus restrictions allow.

Apex had cited the park’s disappointing financial performance when it announced in February that it had shuttered the site, which overlooks Lake Shafer in Monticello and is about halfway between Chicago and Indianapolis.

News of the closure of the park, long known for its slogan and jingle, “There’s more than corn in Indiana,” shocked residents and business leaders in Monticello’s Twin Lakes region, so-named for Lake Shafer and adjacent Lake Freeman, which are popular with summer visitors.

Staples said in a statement Thursday that he is “an amusement park enthusiast” and is excited “to be part of a new era for Monticello.”

“Generations of families have enjoyed summer fun on the shores of Lake Shafer. With their ongoing support, and the commitment of local officials, we will be sure future generations get the same type of relaxation and enjoyment we all desire,” said Staples, now president of Indiana Beach Holdings, LLC.

The 376-acre park, which has traditionally been open from Memorial Day through Labor Day, has provided local employment and income since its opening in 1926. It has long attracted visitors from throughout the Midwest with its roller coasters, water park, zip lines, arcade, mini-golf, children’s rides, boardwalk and sandy lakeside beach.

The newly-purchased amusement park will honor season passes and reservations, said park officials, who announced that plans were in the works to reopen the site and its adjacent campground this summer if coronavirus restrictions allow.

“We hope and believe this is just the beginning of a great relationship and want to thank everyone that has made this possible,” said Monticello Mayor Cathy Gross.

On March 31, White County’s commissioners and its county council offered $3 million in financial incentives to a potential buyer. The $3 million will come from White County’s Wind Farm Economic Development fund, which was granted to the county to be used for economic development projects.