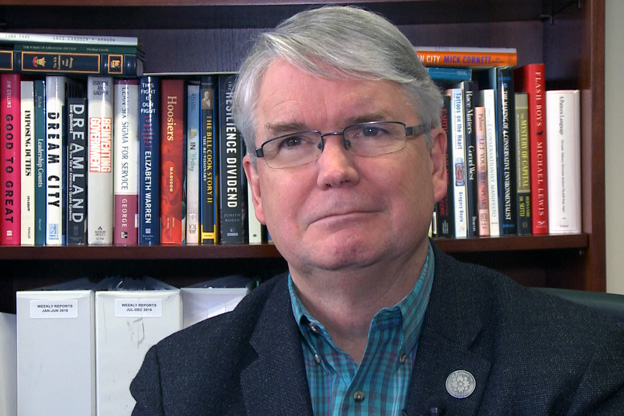 City workers got through the first snow storm of the season, Thursday will be the first architect meeting on the convention center expansion and the mayor's next step in city-wide high speed broadband.

Hren: You've officially recorded your reelection commitment, so 2019 will also be a campaign for your second term. Why run again?

Hamilton: Well I feel very privileged to be in this job, it's a wonderful community and I feel like we've made a lot of progress over three years and like many mayors would tell you, a lot of the work you do takes a long time, you're building the city momentum for decades to come. And we'll be having a lot of discussion about that in the campaign season ahead.

Hren: Catalent announced a $100 million expansion with 200 new jobs by 2024. To go along with that the state is offering tax credits that are performance based… and I hear the city is working on an incentive package. What’s in the works?

Hamilton: We are working on abatement, that will go through city council. In the new economy, the word unicorn is a company that then sells for a billion dollars, and for a community to have a unicorn is a big deal. Catalent is really our first unicorn.

To have a major new enter into the community, expanding from Baxter and Cook to add a major third life science company is a big deal in terms of the climate and ecosystem. It's a positive sign this is a community people can thrive in.

Hren: I've been told to ask you about high-speed broadband, one of your initiatives that seemed to take a hit back when Axia backed out of a city deal, is the process still moving forward?

Hren: We have a question from Ann on email, "With the stated objective of streamlining the process to make building easier in Bloomington, the draft UDO proposes changing the power to grant variances and waivers of zoning regulations from citizen appointed boards to an in-house decision-making process which reduces public input.  Does this fly counter to the mayor’s oft touted goal of making government more transparent?"

Hamilton: It actually doesn't change what we have. Right now there are certain projects that just go to staff if they are a certain size and type. Then there are those that go through the plan commission in the bigger public input. The UDO doesn't change that, the UDO actually tries to split it into three pieces, it creates a new middle ground that does try to say... if you build what we want, this UDO suggests we want to give you a streamline process and if you don't build what we want, you'll have more intense scrutiny.

So it's really not changing the overall structure, it is adding a category where we can try to steer more development toward what we want as a community.