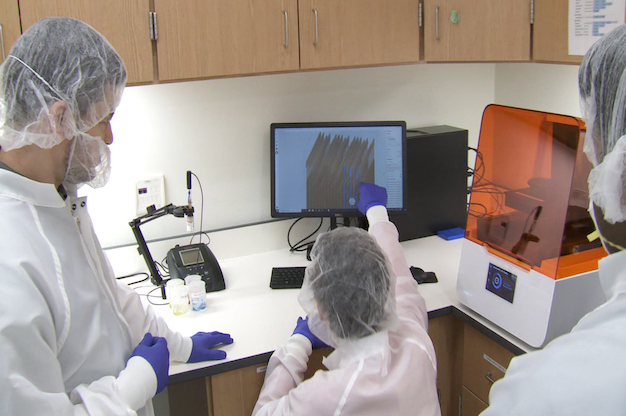 Gumennik's students look at testing swabs to be printed at their lab. (Seth Tackett, WFIU/WTIU News)

Many 3D printing labs and private owners of 3D printers in Bloomington are making efforts to help fill shortages of medical equipment during the COVID-19 pandemic.

The Fibers and Additive Manufacturing Enabled Systems Laboratory, known as the FAMES Lab, Indiana University’s Luddy School of Informatics and Computing is among those trying to help meet the need for medical equipment.

Alexander Gumennik is an assistant professor of Intelligent Systems Engineering who heads the FAMES lab.

Gumennik says he started to get requests last week from people asking if he could use the 3D printers in his lab to make different types of medical equipment.

Since then, Gumennik says he and his students have produced a working prototype of protective face shields, which they are sending to doctors and nurses at Eskenazi Hospital in Indianapolis.

“So the first thing to send them was the face shield," he says. "That was the fastest to make, fastest to try and approve, and now it’s approved and it went to mass production.”

Gumennik says he and his students can print 20 face shields a day in his lab.

He says they also sent a few models of nasal swabs for COVID-19 test kits to be tried out by doctors at Eskenazi Hospital.

“And pretty fast we’ll start getting answers from them, whether they want us to produce it in quantity," Gumennik says.

Louis van der Elst is one of Gumennik’s PhD students who’s been helping design and produce prototypes of the nasal swabs.

He says the models they’ve sent are based off of swabs already in use, but with minor adjustments made to see if they can improve existing models.

“I tried to replicate what’s currently being used... and with that we can have a good grasp on exactly what kind of devices we need to develop,"van der Elst says. "So our swabs are not completely new, they are based on designs that have been tested.”

van der Elst says he thinks approval of a swab design for Eskenazi doctors is near.

“And once we get feedback from the hospital, from the medical doctors, we can optimize that and when they approve of a design, we mass produce it," he says. "The time frames are very different in terms of prototyping and mass producing. We can prototype over a day but mass production can take up to three days.”

Gumennik says between the printers in his lab and a few others across campus, they’ll be able to produce up to 5,000 swabs a week once a design is approved.

He says usually his lab’s work is much more research-based, but the skills he and his students have to use for this project make for good real-world application of their studies.

He says he and his students feel good that they can be uniquely useful at a time where many labs and programs in universities have been shut down.