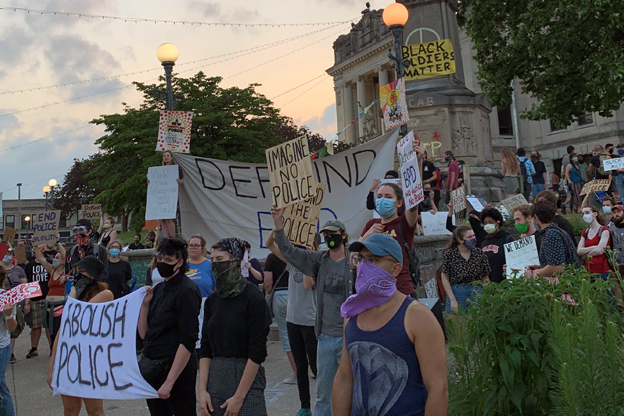 In June, hundreds of people protested at the steps of the Monroe County Courthouse calling for reform in local law enforcement. (Ethan Burks)

The Sheriffs' Deptartment is proposing a $4.5 million budget, which is a slight increase from last year’s budget.

Swain said one of the biggest challenges facing the department is finding qualified applicants. He said there’s been a trend of people not wanting to pursue a career in law enforcement, that started even before the most recent national incidents involving badged officers.

“We may have had a couple hundred applicants, it’s down to about 25. We’ve had only about 4 women apply this time, and none of them appeared at our first initial assessment," Swain said. "So, a lot of people change their mind after succeeding and passing the initial background.”

Several county councilmembers asked the sheriff about the diversity within his department.

"Are there ways to recruit more women or people of color to diversify the Sheriffs' Dept.?" councilmember Geoff McKim asked.

Swain said the department will always make it a fair process and he encourages women and minorities to apply.

There are currently three vacancies for sheriffs’ deputies, but Swain said he won’t hire an unqualified candidate just to fill the position.

“There have been times in the past that we’ve had hiring practices, and nobody met those standards and we started over again," Swain said.

Swain said to ensure the department hires the right people, they will spend more time and money on evaluating candidates who make it to the final round of interviews.

“We anticipate an increase in demand on professional services to make sure we hire morally and psychologically sound applicants," Swain said.

The department is asking for $6,000 to help assist in these in-depth candidate evaluations.

The county’s budget hearings will continue throughout the week as more departments make their proposals for money next year.

A full look at the Monroe County Sheriffs' Dept. budget and the 2021 budget as a whole can be found on the county's website.