It’s the most wonderful time of the year – and also one of the most stressful, especially if you work in Indiana’s public school system.

Teachers and students have been waiting for months to see the results of the statewide standardized ISTEP+ test from last spring – months longer than they’d originally expected. The test’s results have wide-ranging effects on things like school accountability grades, teacher evaluations, and, in turn, teacher pay.

With 2015 coming to a close – and Christmas only a week away – some of that extra money could really come in handy for educators.

‘People are getting frustrated’

Abby Taylor is scouring the toy shelves to find Christmas presents for her kids, seven-year-old Rylee and three-year-old Paxon. They each have one big wish this year… 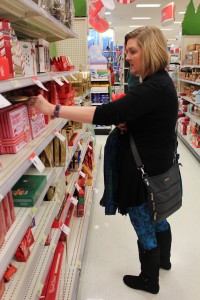 “My son wants Jake and the Neverland Pirates stuff, he loves Jake and Captain Hook,” Taylor says with a smile. “And Rylee wants bunk beds so that her brother can stay and have sleepovers in her room.”

As she roams the aisles, Taylor’s eyes light up when she finds something on her list and it comes in under budget.

“It’s one of those things – do you spend the money now at Christmas, or do you spread it out over the year?” Taylor explains. “My kids don’t get big gifts because we live pretty much paycheck to paycheck on most occasions.”

Taylor is a third grade teacher in the Indianapolis Public School system. If you’re familiar with Indiana’s educational landscape, you know that means her job is considered perhaps the most stressful: third grade is the first year kids take the annual ISTEP+, in addition to a bunch of other standardized tests.

Like everyone else across Indiana, Taylor and her students are still waiting for the results of last spring’s ISTEP+. The score release has been postponed due to multiple technology and grading issues.

“We did not assume that it would take this long. It’s frustrating because when you plan, you’re excited.”
—Abby Taylor, third grade teacher

What’s more: teacher salaries and pay raises are tied to these delayed scores. Which means they’re behind schedule, too. That’s impacting many educators’ wallets during a time of year when many are already tightening their belts.

Abby Taylor is – or was – slated to get a bonus this fall. That could have added anywhere from $600 to $1000 dollars to her end-of-year budget.

“People thought that they could save it for Christmas money, or vacation at fall break,” Taylor says. “The longer it gets pulled out, the more people are getting frustrated.”

Whether a district can offer its teachers pay raises or bonuses depends on how those teachers perform on their annual evaluations. If they are rated as “effective” or “highly effective,” they qualify.

Indiana State Teachers Association President Teresa Meredith says teachers always used to start school in August knowing what they would be paid for that year – but a few years ago, when the law changed to directly tie teachers’ compensation to their performance evaluation, that’s when things got out of whack.

Here’s the problem: Indiana implemented a brand-new ISTEP+ for the first time during the 2014-15 school year to match new academic standards adopted after the state exited Common Core. 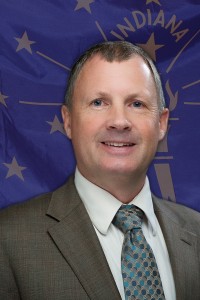 Sen. Mark Stoops, D-Bloomington, filed a bill to hold schools harmless from those results – a measure he requested the General Assembly take up on Organization Day, the unofficial start of the legislative session November. But it went untouched. Instead, lawmakers in the House and Senate said they’d work quickly at the start of session in January to prevent the tests from impacting teacher evaluations for one year.

But Stoops says it’s too late. At that rate, he says he’s not sure if an easy fix is possible.

“The more I look into it, the more I find that no matter what fix we propose in January, it’s not going to help,” Stoops says. “It’s going to be a mess. It’s kind of like watching a slow-motion trainwreck that’s really been coming for a year or two years.”

And, Stoops adds, if legislators want to reverse Indiana’s teacher shortage, they ought to consider how those people are paid.

His colleagues across the aisle agree – including House Education Committee chairman Bob Behning, R-Indianapolis. Behning says there are ways to hold teachers accountable and still pay them for what they do.

“I think bottom line is we need to try to figure out ways to pay more,” Behning says. “Getting away from bonuses, and getting back to base salaries, those are things we can do in a non-budget year because it’s not really impacting the state budget.” 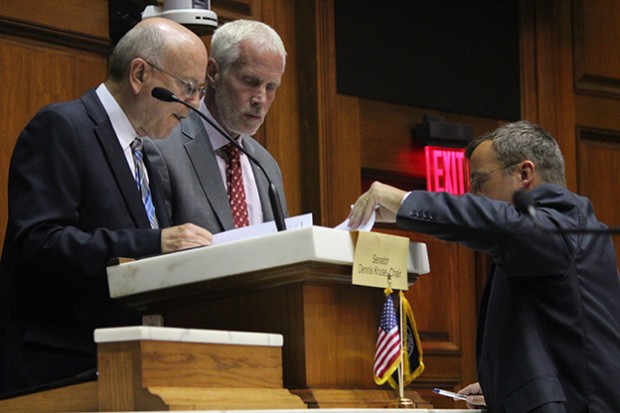 Behning adds that he’s concerned people misunderstand how heavily ISTEP+ plays into evaluations. He says those are calculated on a local level – the state only mandates that test performance be included in some proportion, they don’t designate the exact percentage. So in some districts only five percent of a teacher’s evaluation is based on student test performance, but it might be a larger portion in other corporations.

Along with Behning, Stoops sat on the legislature’s Interim Study Committee on Education, taking part in hearings held this summer on assessments and teachers. After taking it all in, Stoops says he wouldn’t advocate for totally untying test results from teacher evaluations, but he does like the idea of making them count less.

“[Tests] should be a very minimal part of any accountability system,” Stoops says. “How well the student is learning under that teacher, to me is a better example of how that teacher is doing than the summative test.”

Remember, summative tests (including ISTEP+) determine how much a child knows up to that point; they show a sum of all a student has learned throughout his or her education. Formative tests, like your more traditional unit test, demonstrate how a student is performing now compared to how they did before.

“A formative test allows you to really tell how well a teacher’s doing with an individual student – and that’s an effective teacher,” Stoops argues.

The Department of Education now expects to release finalized ISTEP+ scores in January.

“[Tests] should be a very minimal part of any accountability system.”
—Sen. Mark Stoops, D-Bloomington

Meanwhile, teachers like Abby Taylor are in limbo. Most of their contracts for the current school year started in July or August. If they receive a bonus, it will come in the form of retro-pay – one big paycheck covering the extra money they would have earned from the beginning of the year.

That’s frustrating to Taylor, who earned a “highly effective” rating on her 2014-15 evaluation.

“These test scores mean nothing to me, because my evaluation was good so I should be getting this raise no matter what,” Taylor explains. “I made student learning objectives, my kids grew. The state thing doesn’t really affect my evaluation that much. It might bring it down a few decimal points, but nothing to say, ‘you don’t get your raise.’”

That extra money could really help Taylor out. Her husband is also a teacher, who coaches lacrosse on the side to make a little extra money. According to the Center for American Progress, he’s among the 16.1 percent of teachers who hold additional jobs. The Taylors already stretch every dollar they earn to cover year-round costs like tutoring and afterschool care. Abby is only two credit-hours away from earning her Master’s degree, and she’d like to be able to fund that, too.

For now, the Taylors are making some adjustments to finish crossing things off their shopping list. With only a week left until Christmas, they’re scrambling to figure out how to fulfill daughter Rylee’s Christmas wish of bunk beds.

“We kind of have decided that we’re going to build it. I think in the end, she’s going to be happy with whatever she gets,” Taylor says. “Would I love to get her those things? Absolutely. How do you justify it when in January we may be pulling too much money out of our accounts because we overspent during Christmas to make sure that our kids got something?