Tuesday marked Organization Day, the official kickoff to the 2016 legislative session and the day lawmakers reveal more details about their ideas for upcoming legislation.

As we reported yesterday, legislative leadership plans to take on Indiana’s teacher shortage this session by introducing measures to emphasize teacher recruitment and retention. 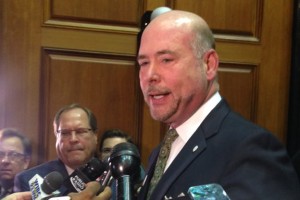 House Speaker Brian Bosma elaborated on the plan for House Bill 1002, which he will co-sponsor with Rep. Tony Cook, R-Cicero, a former school superintendent, and House Education Committee chair Rep. Bob Behning, R-Indianapolis. The bill will advocate for a program first brought to legislators’ attention by State Board of Education member Gordon Hendry, as a way to encourage more people to go into teaching.

As we reported when Hendry introduced his plan in August, the Next Generation Hoosier Educator Scholarship program would give Indiana’s top high school students an opportunity to earn a full ride scholarship to any accredited in-state school of education, so long as they spend five years teaching in an Indiana classroom after graduation – one more year than the four Hendry originally proposed.

“Our program’s going to say five years, which is related to the statistic on keeping teachers in the classroom – there’s bona fide evidence that they tend to stay [after five years],” Bosma says.

Hendry says he’s pleased the legislature is including his plan as part of the 2016 education agenda.

“I look forward to helping make this plan a reality,” Hendry said in a statement. “Making sure there are great teachers in every classroom is critically important to the future of our state, and it’s something we can all work together to solve.”

Bosma says there may be available funds to pay for the scholarships beginning this year, despite the fact that 2016 is not a budget session.

House Minority Leader Scott Pelath, D-Michigan City, says he and his party are on board with finding ways to recruit more teachers into Hoosier classrooms.

“That’s not an ideological thing, we all want good teachers who are happy doing their jobs,” Pelath says. “There’s probably different ways to go about that. I think the discussions there have to be around what’s actually going to be the most effective in bringing that about.” 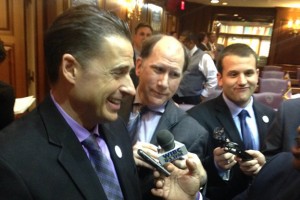 Pelath says he hopes the Republican-led House will listen to Democratic state Superintendent Glenda Ritz, who has been working with her Blue Ribbon Commission to determine best practices for recruiting and retaining Indiana teachers. Pelath says he wants to be a voice for Ritz’s ideas in his chamber.

Speaker Bosma has also indicated the General Assembly will work on finding a way to unlink teacher evaluations from standardized test scores for one year. ISTEP+ scores from last spring are expected to drop significantly, since 2015 marked the first year Indiana schools tested students on a brand new set of academic standards.

Both Gov. Mike Pence and state Superintendent Glenda Ritz have advocated for this type of fix. For her part, Ritz says she’s pleased lawmakers are now having the conversation.

“I don’t want to have our schools, our teachers and our communities penalized because we are putting upon the schools grades that really do not reflect the quality of the schools,” Ritz says. “We gave a new, more rigorous assessment – it’s as simple as that.”

Bosma says this one-year “decoupling” is not the same things as the “hold harmless” action Ritz has advocated, which would pause school accountability measures completely. He says that would need to turn into a two-year program, since the state’s new A-F system would be based on year-to-year growth measures, as well as student performance.

Bosma says he hopes this action can happen quickly at the start of session, but gave no indication it could occur any sooner, as other lawmakers – like Sen. Mark Stoops, D-Bloomington – and organizations – including the Indiana State Teachers Association – have requested.

This could impact the timeline for teachers who typically rely on end-of-year bonuses or pay raises. Those are on hold until after the release of ISTEP+ results and A-F school accountability grades – which, following a series of technology and grading delays, may not come until after the new year.

Superintendent Ritz says her Department of Education has been working alongside legislative leadership and the State Board of Education to develop an updated timeline for getting scores, grades and merit bonus awards to schools. She says schools have seen that timeline, too – and right now, the state is on track to meet the following deadlines:

Similar to the House, Senate leadership says they plan to work on a solution to safeguard teachers.

“I don’t discount the work Sen. Stoops put into this,” says Senate President Pro Tem David Long, R-Fort Wayne. “We also will be working toward a solution on that, and we welcome his input.”