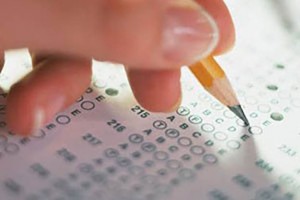 Indiana has not yet seen an end to this year’s ISTEP+ testing saga or the state’s controversial relationship with testing company CTB-McGraw Hill.

CTB officials informed State Superintendent Glenda Ritz there is an issue with a batch of new technology-enhanced test questions included on the statewide ISTEP+ test for the first time this spring, which will lead to a delay in the release of those test scores.

In an email obtained by StateImpact dated Tuesday at 3:48 p.m., Indiana Department of Education staff informed State Board of Education members that they had learned of the issue late Monday afternoon.

“CTB-McGraw Hill informed us that there will be a delay in the delivery of the scores of the 2014-15 ISTEP+ administration,” the email reads. “This will require a change of the timeline for providing ISTEP+ results to the field.”

What exactly does this mean?

The State Board is still discussing options for 2014-15 A-F grades – they kicked around ideas at last month’s meeting, based on flexibility granted by the U.S. Department of Education for states in transition periods for academic standards and assessments – student scores are often low the first year an exam is introduced. We’ll have to wait and see what this latest development means for test scores, and whether or not that impacts the decision of what to do with grades.

The timeline for making that decision will surely be impacted. IDOE Deputy Superintendent Danielle Shockey had said the board would probably need to take action on accountability by October – once they have established cut scores for the current set of ISTEP+ tests – although it would be preferable to move sooner rather than later.

After ditching the Common Core in early 2013, the state scrambled to create new standards, which led to the task of writing a new assessment last summer. At that time, the board discussed with many experts in the field how they would test the functionality of these items on such a short timeline. It was decided that rather than field testing the assessment, essentially giving students the test in the fall to just practice the technical side of it, they would administer an “operational field test.”

The IDOE assessment team said this operational field test meant students would take the ISTEP+ in the spring as planned, but extra questions would be added that would serve as the pilot questions.

The reason the IDOE and SBOE went with this option is because the assessment was still being created in late summer and early fall and wasn’t ready for field testing at that point.

The question now is whether field testing the items in the fall would have prevented this current issue, or if this situation was inevitable.

This is not the first issue Indiana has faced with CTB. Schools were forced to suspend testing for multiple days in 2013 when tests malfunctioned; the company blamed it on server problems. Some districts faced similar interruptions yet again this spring.

CTB’s contract with Indiana ended this spring. British testing company Pearson has been tapped to form the new version of the test for the 2015-16 school year.

CTB president Ellen Haley will attend Wednesday’s State Board of Education meeting to answer board questions and present additional information. That meeting will be live-streamed beginning at 9 a.m.