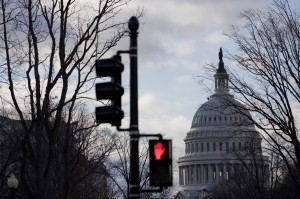 For months, a possible update to the controversial No Child Left Behind law lingered in the education atmosphere, but it wasn’t until last week that Congress finally passed a new version of the Elementary and Secondary Education Act and President Obama signed it into law.

The new version is called the Every Student Succeeds Act, or ESSA.

The biggest change? The federal government won’t mandate the same expectations for all states, and the new version of the law allows states to have more of a say in how they address testing, accountability and failing schools, among other things.

(Education Week published a handy, in-depth guide to all the important aspects of this law – check it out here.)

If states have more control, how will Indiana exercise it?

Currently, Indiana has a waiver from No Child Left Behind. Indiana Department of Education spokesperson Samantha Hart says the department is waiting to hear from the feds on what this update means for the waiver. In the past, it exempted Indiana and many other states from meeting certain requirements of NCLB – for example, getting almost all students proficient in math and English.

But Hart says state Superintendent Glenda Ritz and the IDOE want to explore a few things now that they have some flexibility from the federal government, one being assessments. Hart says Ritz is advocating for a new test that combines aspects of both formative (think NWEA) and summative (think ISTEP+) assessments.

“The growth measures found in formative tests are important to students and parents, and also to educators,” Hart says. “This combination would retain the summative components required by both ESSA and state law, while also reducing the time that students spend on testing.”

Hart says adjusting how test scores factor into a teacher’s evaluation is also a consideration under the new law.

The flexibility under ESSA appeals to legislative leaders on both sides of the aisle, who are trying to figure out what to do about A-F accountability grades and the future of state testing after they saw that this year’s scores were incredibly low and that testing company CTB incorrectly scored tests. Most education leaders agree something should be done to address all the problems – and without federal government requirements, Indiana might have options.

There’s talk of revisiting a conversation that started last legislative session when Sen. Luke Kenley, R-Noblesville, suggested the state not use ISTEP+ but rather a test like NWEA that doesn’t need to be adapted to Indiana’s individual academic standards.

The legislature will likely discuss testing, accountability and how the new federal flexibility opens up new options once session begins in January.

None of this can go forward though until the the U.S. Department of Education begins to issue guidance on how states can transition from the current system to the new one created under the law.