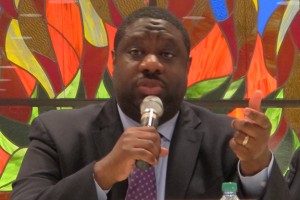 Marcus Robinson, Chancellor & CEO of EdPower, a non-profit organization operating several charter schools in Indianapolis alongside one of the state takeover schools.

Robinson, the chancellor and CEO of the non-profit school operator EdPower, runs several Indianapolis charter schools along with Arlington Community High School, one of the schools the state has taken over for academic underperformance.

Students on free or reduced price lunches make up a majority of the population in his schools. At Arlington, 86 percent of students receive government help paying for meals.

“We look at our students not as underprivileged, but under-resourced,” Robinson says.

Robinson talked about the difference between the two in an interview with StateImpact for our story on how poverty impacts national and international test scores. Read a transcript of that interview, lightly edited for style and length, below:

StateImpact: ‘Underprivileged versus under-resourced’ — I’ve never heard that distinction before. What’s the difference?

Marcus Robinson: Fundamentally, I think it comes down to how you view kids, which is to say, how we look at kids feeds our expectations for them. If under the circumstances, I look at my kids as if they are incapable by virtue of their circumstances, then ultimately, they work down to my expectations. If, on the other hand, I say, ‘These kids are just as capable as any other kid, and just lack the resources they need to be successful,’ then now I have a shot at really having an impact on making sure these kids can get to the next level. We always want our staff oriented from the perspective that all kids can be amazing with the right resources.

SI: What is the ‘no excuses’ philosophy?

MR: I’m not sure that the ‘no excuses’ philosophy is ours. There are a continuum of schools nationwide who would subscribe to a ‘no excuses’ philosophy that they design as, ‘All kids can do amazing things without excuse,’ and that’s not just about academics, that’s about deportment. I don’t know if we belong to that club or not. I would definitely say that we are hell-bent on making sure every kid has the opportunity to attend a great four-year college or university. While I think a number of our peers would say, ‘It’s not excuses for kids,’ the interesting bend that we would take on that is that, ‘It’s not excuses for adults.’ What can we do to be more and more amazing for kids and have a greater and greater impact? Our approach is really more about teacher empowerment than it is about student empowerment…

Every Friday afternoon, we’re doing professional development for teachers across our network to be able to grow them into stronger and stronger educators. Kids in impoverished situations tend to get the weakest teachers — not weak because the teachers don’t care, but weak because they’re relatively young in experience — so, what are we going to do as a community then to grow their capacity quickly so they can have an impact?

SI: Poverty has a lot to say about how well your state scores on international tests. Indiana does pretty well, but we’ve got a low amount of poverty relative to the rest of the country. Is poverty something that just impacts test scores, or does it impact learning at some level beyond what we can measure?

MR: Poverty doesn’t just have a resource impact on kids, it has a psychological impact on kids. In some ways, I would argue within our school community, we try to provide some respite from the vestiges of poverty. We try to level the playing field and ultimately diminish the view that there’s a differentiation in economic impact.

We have a uniform. That uniform is generally about hiding poverty. You can’t tell the kid who lives in abject poverty from the kid who lives in relative affluence as you go into a particular classroom. If kids don’t have resources, we get them to the kids in a way that’s not obvious. We don’t do second-class citizenship. Some of it is about how you get through the psychological impact that, ‘Because I don’t have much money at home, I can’t be successful in school.’

I would argue a lot of inner-city schools aren’t taking on that issue. I just don’t know that you’re ever going to overcome the achievement gap if you don’t deal with some of the psychological issues that are present for kids. Whether that’s about poverty versus affluence, race, class; somehow you have to push kids out of the psychic space that I can’t do as much as my peers who have more, whatever more means.

[pullquote]The question I had in principal school was, ‘Is it fair for society to take all of its ills and drop them at the schoolhouse door?’ The superintendent teaching the class said, ‘Well, it doesn’t matter whether you think that’s fair — it’s going to happen.’[/pullquote]SI: Among the ways you can interpret the test scores in relation to poverty is you could say, ‘Well, we’re doing pretty well despite high poverty rates,’ or you could conclude we have two very unequal educational systems — one for the rich and one for the poor. Which do you think is closer to the truth?

MR: Probably both, right? If you orchestrate the school the right way, you can shrink the impact of poverty in the educational setting. There are limits to that, of course, because if poverty leads to social dysfunction — i.e. I live with a chemical dependent, or I have a parent who’s incarcerated, or I’m living with extended family members because my immediate family is so jacked up — now we’re not just talking about the fact I don’t have money, we’re talking about a different kind of spiritual and psychological impact. There’s more going on for a kid with post-traumatic stress disorder than there is for a kid that happens to live in a family that doesn’t have much money.

There are limitations, but I would think what we try to do, what I think schools like us try to do is to mitigate the impact of poverty on the educational setting. I can’t change their house. You still go home to very disgusting kinds of circumstances, however, when you’re in school, you ought to have an opportunity to be successful.

That’s how it was when I grew up — really tough neighborhood, really poor, but when we got to school, school was respite. If you didn’t have something, our teachers made sure you had it. If that meant you didn’t get a bath, my teachers would make sure you don’t get to come to class and smell. Under the circumstances, schools can have a mitigating impact. I just don’t think schools view it as their responsibility to have a mitigating impact. We spend money on other things instead of trying to alleviate the impact of poverty on education.

To the notion there are separate, unequal school systems, that is absolutely the case. Before I started Tindley, I was working in an independent school setting. That, compared to the suburban school where I trained was a really inequitable kind of preparation. I’m not even comparing them to the inner city… If we’re going to compare schools — i.e. really great private school to suburban school, really great suburban school to inner-city school — I think we need to say, ‘What does it mean to really get to the point where you can put these schools on a level playing field?’ Because all of the kids don’t have the same resources. It’s a baseball game. I have a bat, you have a tennis racquet. We’re not playing by the same rules or the same equipment.

[pullquote]I’m not anti-teacher — I enjoy teaching, I enjoy being a teacher, I know the struggles that come when you’re teaching your head off and you have an administrator in the wrong direction. But somehow, we’ve got to transform the conversation and make it more about what kids need.[/pullquote]SI: Do we look too often to school as the fulcrum for societal change? Not to say the work you do isn’t important, but if we are looking to schools to right socioeconomic wrongs, are we putting our focus in the wrong place?

MR: Absolutely. The question I had in principal school was, ‘Is it fair for society to take all of its ills and drop them at the schoolhouse door?’ The superintendent teaching the class said, ‘Well, it doesn’t matter whether you think that’s fair — it’s going to happen.’ As a graduate student, now as a practitioner, I don’t think that’s the right answer.

Schools are not just, probably, unfairly targeted as the place to resolve societal ills, but woefully unprepared. I don’t have a staff that is prepared to deal with medical issues. I don’t have a staff that’s prepared to deal with severe mental health issues. Fundamentally, there are some things that get in the way of a child’s learning that have nothing to do with cognition or instruction. They have everything to do with things that go on beyond the school walls.

Too frequently, schools are asked to alleviate those issues when they don’t really have the firepower to get that done. If a child has a severe psychotic break, for the most part, we expect that kid to be maintained within the school setting in one way, shape or form. That’s not true of a child with a gunshot wound. We triage, we get this child the kind of critical care that was necessary for him to come back to school at some point when he’s not bleeding from the gullet and be successful.

SI: You’ve run at the problem, enrolling high numbers of students in poverty. Your schools’ test scores have shown improvements. Why is it the broader school system can’t do what you’re doing?

MR: I don’t think we have a client-focus within K-12 at this point. A lot of people talk about kids in the abstract but not the concrete. That was a lot different from when I worked in a hospital where there was a patient focus. The needs and desires, the quality of life issues that surround it, nurses and doctors and other hospital staff could never trump the rights of the patient.

Too frequently, we’re talking about what works for adults and not for kids. I hate working eight- or ten-hour days, but I have kids who need that. It doesn’t matter that it means I spend less time with my own children. The kids that I work for need that.

The kids I used to work for didn’t. They had a six-and-a-half hour school day. That was sufficient. The kids I currently serve don’t have the resources. There is no Sylvan learning for them. There are no IUPUI tutors for them. At the end of the day, if I don’t support them, they fall. That’s not the conversation we’re having broadly — that our school day is too short, our schools are not open enough. We can’t take a high-poverty situation, know that kids are behind, and shut down for two months. That doesn’t work.

Under the circumstances, we’re just having the wrong conversation, because we’re still talking about teachers’ rights and we’re not talking about students’ rights. I’m not anti-teacher — I enjoy teaching, I enjoy being a teacher, I know the struggles that come when you’re teaching your head off and you have an administrator in the wrong direction. But somehow, we’ve got to transform the conversation and make it more about what kids need.