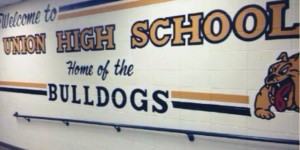 Two opposing community groups in Sullivan County are lobbying the Northeast School Corporation. One group wants to save Union Junior/Senior High School. The other group says the school should close.

No one wants to see Dugger and Union High School close, but the bottom line is that “there is no other choice,” Leslie Hawker, chairwoman of Save NESC, told about 60 people Wednesday at the Shelburn Community Center.

“If we do nothing, we are finished — the corporation will go down,” she said.

The group supports a reorganization proposal that calls for closing both Union Junior/Senior High and Dugger Elementary. Two elementaries would remain: Hymera and Farmersburg. Shelburn Elementary would be closed, and instead it would become a sixth/seventh/eighth middle school, serving the entire school district. North Central would serve as the district’s sole high school.

The district has made serious cuts to staff and programs. “There is no place else to cut,” Hawker said. The district currently is spending more than it is taking in. “We can’t sustain this level of expenditure one more year,” she said.

Loughlin writes that a separate group, Save Union High School, fears closing the schools would mean the end of their small town. The school board will meet Nov. 25 to hear from both groups before considering a reorganization plan early next month.

We’ve written before about small, rural districts asking voters to consider property tax increases to keep their schools open, but that’s not an idea Northeast School Corporation has floated.