The eight students in Ben Davis High School’s AP Statistics class didn’t have time for senioritis. On Tuesday, their last day of high school ever, the eight college-bound seniors dressed up for a final presentation.

We first met this group two weeks ago after Wayne Township superintendent Jeff Butts asked me to explain the labyrinthine grading formula to the class.*

For the next step of their assignment — making formal recommendations for how to re-write the A-F model — Butts invited three state lawmakers, including House Education Committee Chair Bob Behning, R-Indianapolis, and a representative for state superintendent Glenda Ritz to the Indianapolis high school to hear their proposals.

But while the students’ pitch couldn’t be more timely — the Indiana General Assembly has given state education officials until November to completely re-write the formula — the Ben Davis class is also entering a political fray as complex as the A-F grading system itself. 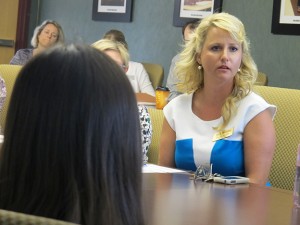 In fact, the model’s complexity has become a particular point of contention.

Former state superintendent Tony Bennett crafted this model with the intention of including metrics beyond a simple pass-fail rate on statewide tests in a school’s letter grade.

However, Ritz has said state officials are at a loss for how to tell schools to improve their grade and prominent state lawmakers have said the grading system is not transparent.

But as they told the lawmakers and local school leaders assembled in the high school’s main conference room, the Ben Davis students want state officials to add more complexity to the model.

“Any attempt to improve it will inevitably make it more complicated. But a law doesn’t have to be really simple in order to be successful,” senior Kegan Ferguson explained to StateImpact. “It just has to accurately measure a high school’s performance.”

What The Students Recommended

Ferguson and his classmates in teacher John Ulbright’s class drew up recommendations for the high school model, which is different from the model that measures schools where students take the ISTEP+ exams.

Currently, the high school model breaks down this way:

Here’s how the Ben Davis students propose to change the formula:

The students also suggested informing students of the grade and of helping school leaders set goals for improving their grade.

How The Room Reacted

After the presentation, Wayne Township superintendent Jeff Butts opened the floor for comments and questions of the students. (Not only were state lawmakers and a representative from the Indiana Department of Education present, but also members of the Wayne Township school board and Indianapolis Public Schools board member Caitlin Hannon.)

“Some of their recommendations make me uneasy, but that was the intent,” Butts told the audience. “When we’re talking about policy changes to our schools, the only people that ever testify in front of our legislature are the adults.”

Behning suggested the students might re-think their idea to “curve” a school’s grade based on its free and reduced price lunch enrollment:

If you are a school that has higher free and reduced lunch population, the school funding formula will pull in more money for that. We recognize that those students are more difficult to educate. We are trying to, on the other end of that, provide more funding and services for those students so they have greater opportunity for success. I think the state recognizes that’s a problem.

The flip side is, if you’re a student in that school, when you graduate, the real world doesn’t change because you were a child of poverty. You go to an employer and they don’t say, ‘I’m on free and reduced lunch’ and make exceptions from you. How do you address what happens once they leave their school?

We put together this video explaining how state officials might re-write the A-F grading system — and why.

“I don’t think we’re recommending putting it on a curve necessarily,” student Kegan Ferguson responded. He says adding growth measurements to the high school grade would address the students’ concerns.

Behning suggested another metric for the students to consider:

There is one other thing that… I think we need to start using to evaluate effective high schools: what level of remediation is required once you leave. There’s a significant number of students that will walk out of this school, graduate, walk into IU, for instance, and find out I’m not ready to go to IU, I have to start taking remediation courses… We’re talking about significant numbers, we’re not talking about two or three percent.

Rep. Karlee Macer, D-Indianapolis, pointed out the state’s budget for testing and remediation — currently about $46 million — is largely spent on testing, not remediation.

“Do you feel like it would be more helpful,” she asked the students, “for the state of Indiana to spend more money prior to you graduating from school, going on to college, to help you with remediation before you leave high school?”

Ferguson said that wasn’t something the students considered.

Beyond their potential impacts to a school’s reputation and parents’ school choices, the “A-through-F” grades also mark underperforming schools for state intervention.  With so much at stake in the rewrite, many are sure to offer their thoughts on how the new rating formula should look.

Butts and teacher John Ulbright intend to submit the students’ full list of recommendations as official public comment during state officials’ rewrite process. The State Board of Education ultimately will have to sign off on a new grading formula by November 15.

We have more perspectives on what the new grading formula should look like here.