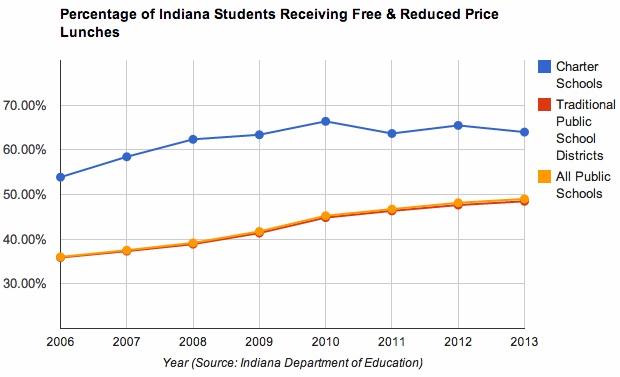 From 2006 to 2013, the percentage of students who receive free or reduced price lunches in Indiana public schools has jumped 13 points.

Students considered to be “low-income” now constitute majorities of the public school populations in 17 states — mostly in the American South and West — according to a recently-released report.

And while Indiana public schools aren’t quite at that point yet, they’re coming awful close.

“There has been a steady increase in the number and percentage of low income students attending America’s public schools for a much longer period of time,” researchers at the Southern Education Foundation write.

How you interpret this trend likely depends on where you stand in a bigger debate in education policy.

On one hand, some advocate for fixing American schools as a means of solving a burgeoning poverty problem. Others say poverty itself, not American education, is the problem.

The study’s authors simply worry the increasing prevalance of poverty in the public schools will only serve to widen the gap between the rich and the poor. Here’s the Southern Education Foundation’s conclusion:

Within the next few years, it is likely that low income students will become a majority of all public school children in the United States. With huge, stubbornly unchanging gaps in learning, schools in the South and across the nation face the real danger of becoming entrenched, inadequately funded educational systems that enlarge the division in America between haves and have-nots and endanger the entire nation’s prospects.

Gawker’s write-up of the study lays the increase at the feet of private education, calling the national research proof of “the conversion of the ‘public’ school system into a separate and unequal educational system catering to the poor and powerless.”

But Indiana’s schools of choice also have seen increases in their low-income populations.

The percentage of students at Indiana charter schools who receive free and reduced price lunches has hovered above 60 percent for half-a-decade. (Which makes sense given many of the districts that also have charter schools within their boundaries have larger-than-average low-income populations.)

In a large swath of the country, classrooms are filling with children who begin kindergarten already behind their more privileged peers, who lack the support at home to succeed and who are more than likely to drop out of school or never attend college.

“This is incredible,” said Michael A. Rebell, the executive director of the Campaign for Educational Equity at Columbia University, who was struck by the rapid spike in poverty. He said the change helps explain why the United States is lagging in comparison with other countries in international tests.

“When you break down the various test scores, you find the high-income kids, high-achievers are holding their own and more,” Rebell said. “It’s when you start getting down to schools with a majority of low-income kids that you get astoundingly low scores. Our real problem regarding educational outcomes is not the U.S. overall, it’s the growing low-income population”…

“We have an education system that continues to assume that most of our students are middle class and have independent resources outside the schools in order to support their education,” [Southern Education Foundation vice president Steve Suitts] said. “The trends and facts belie that assumption. We can’t continue to educate kids on an assumption that is 20 years out of date. We simply have to reshape our educational system.”