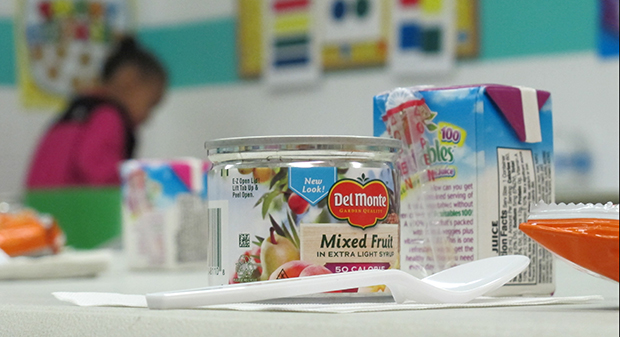 An after-school snack sits on a table waiting for students an East Chicago community center classroom. It's part of the "Hope Project," an after-school "nutrition and academic support program" a local food bank offers to students who qualify for government help paying for their meals in school.

Jalea’s pencil hammers loudly on the desk as she writes, speeding through a worksheet of multiplication problems as light drizzle falls outside an East Chicago community center on a dreary Thursday afternoon.

“This is easy,” the fourth grader sighs as her tutor hands her another sheet.

But Jalea isn’t only here for after-school homework help. She’ll leave here with enough food for the weekend.

Like nearly 95 percent of the kids in East Chicago, Jalea gets government help paying for her meals at school. That qualifies her for the local food bank’s new after-school tutoring program, which also provides a grocery sack full of enough ready-to-eat meals to last her until Monday.

“If you’re worried about, ‘I don’t know where my next meal’s going to come from,’ obviously that’s something you’re going to worry about more than doing your homework,” says Megan Sikes of the Food Bank of Northwest Indiana, which offers the program.

Meeting the most basic needs of low-income students can make the results of recently-released national and international test scores feel distant. But education experts say the difference between low-income and middle-class students explains a great deal of the data. 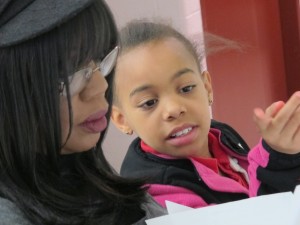 Fourth grader Jalea talks with her tutor, Helen Dalton, at an after-school tutoring program put on by a local food bank in East Chicago.

Similar international tests show Indiana students’ performance on math and science tests are above the worldwide average. In fact, they’re on par with students in Finland, a country some hold up as a model.

But the encouraging results come paired with fresh evidence that the difference between low-income students’ performance on tests compared to their more-affluent peers isn’t getting any smaller, despite massive state and federal efforts to close this “achievement gap.”

The problem goes beyond East Chicago. 350,000 Indiana children live in poverty — 120,000 more than a decade ago. The national child poverty rate is higher than all but five countries in the developed world. That shows when education experts compare test scores worldwide.

Life In the Achievement Gap

International test scores reflect averages, but to see the extremes, break down the scores by state. States with larger populations of low-income students are less likely to compare favorably to their international peers. Students in Alabama, for example, could do better in some schools in Armenia or Kazakhstan.

The Southern Education Foundation’s Steve Suitts says the gap between schools in places like East Chicago and top-performing districts is the critical problem facing American education.

“The upper-class students in the U.S. can compete with anyone in the world,” says Suitts. “What we have is, in fact, a system that is not serving low-income students well.”

Robinson’s the CEO of EdPower, a non-profit charter school operator that also runs one of the Indianapolis high schools the state took over last year. He says schools can’t change a student’s substandard home life, but they can make sure poverty plays as small a role as possible once students arrive in the building.

But Robinson says leaving society’s ills at the schoolhouse door isn’t the solution.

How To Interpret International Test Results

Rutkowski says that message is often lost as policymakers push for systemic reform.

“We’re doing great. It’s not that there aren’t schools that could improve; for sure there are. But evidence suggests that Indiana isn’t in dire need of a massive overhaul,” says Leslie Rutkowski, an Indiana University education professor who, like her husband, studies international test scores.

Setting big goals for all schools, though, says Achieve senior fellow Cory Curl, is key to driving improvement in education. She tells StateImpact:

The intent of setting goals and making sure that all the work you’re doing is aiming toward those goals is not to have people feel terrible about where they are now. It’s a way to focus improvement and ensure that the state is on a trajectory toward some really meaningful outcomes. I’m sure in Indiana, as in many other states, there are students who are doing really very well and graduating from high school prepared absolutely for everything that comes next. But that’s not true for all students. Ensuring that level of preparation and the opportunities are available for all students in order to lift the entire state as a whole is also absolutely crucial.