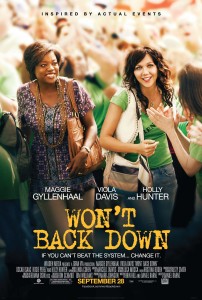 'Won't Back Down,' a movie about parent trigger laws, is in theaters Sept. 28.

No, you’re not the only one experiencing a sense of déjà vu — the parent trigger movie “Won’t Back Down” screened Monday before the Democratic National Convention was also a highlight last week in Tampa.

Asking which party supports the so-called “parent trigger” is a trick question, writes P.L. Thomas for AlterNet in a post picked up by the National Education Policy Center. There’s enthusiasm from both Republicans and Democrats for laws that allow a majority of parents whose children attend a failing school to petition for broad changes.

California passed the first parent trigger law in 2010. Since then, other states — including Indiana — have considered similar legislation.

Here’s how these laws typically work: A majority of parents (usually 51 percent) sign a petition to overhaul a chronically underperforming school. That “triggers” intervention, like finding a new principal, replacing much of the staff or turning the school into a charter. In California, parents can also use the petition to bargain for specific interventions.

Advocates say this returns power to parents, who aren’t able to wait for failing schools to slowly enact policy changes. Opponents criticize parent trigger laws for leaving teachers and administrators out of the equation.

Where Movie Differs From Real Life

There’s no such thing as the Pennsylvania Fail-Safe Act, writes Ross Brenneman in his review of “Won’t Back Down” for EdWeek. He explains:

There are parent-trigger laws. There are teachers. There is a real place named Pittsburgh. But “Won’t Back Down” is inspired by a true story in the same sense that “Gladiator” was inspired by the true story of Rome existing.

The two parents who start the petition, Jamie (the literally unblinking Maggie Gyllenhaal) and Nona (Viola Davis, who corners the market on reluctant heroes), want better lives for their respective children. Failing to win the charter school lottery, the pair unite when Jamie convinces Nona that a petition is the only option left.

But Brenneman also notes a key difference in the fictional Pennsylvania law from existing parent trigger legislation. In the movie, Jamie and Nona have to convince a majority of teachers to sign the petition as well.

“Or rather, the teachers themselves are given a vote of confidence in the school’s administration,” writes Brenneman. “This actually sets up one of the film’s key points of conflict, with teachers deciding between job satisfaction and job security.”

The end result is a movie less about parental authority and more about “the frustrations of poverty,” he concludes.

‘Won’t Back Down’ Gets Positive Reviews From Republicans 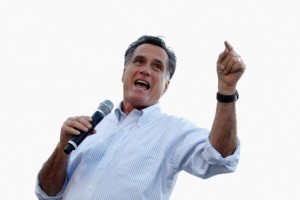 So how did attendees of the Republican National Convention react to the movie?

Michelle Rhee, a Democrat, was in Florida last week to speak at the screening. Joining the former chancellor of the District of Columbia public schools in Tampa was Jeb Bush, the former governor of Florida and a proponent for sweeping educational overhaul. Alyson Klein of EdWeek explains:

Education policy used to be the one area in Washington where Republicans and Democrats could come together to get something bipartisan and big done—witness the coalition that passed the now-much maligned No Child Left Behind Act. But lately, Washington (well, Congress) has been dysfunctional even on this issue. Exhibit A: the meltdown of reauthorization of the Elementary and Secondary Education Act.

But during the panel, both Rhee and Bush expressed optimism that Republicans and “reform-minded” Democrats could come together on education policy.

Klein writes that “Won’t Back Down” was well-received by the Republican audience. Bush even complimented some of Obama’s education initiatives — chiefly, Race to the Top — but made it clear that he believes states should set education policy, not D.C.

Why Parent Trigger Laws Are Dividing Some Democrats 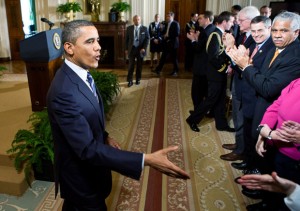 So here’s where you might be surprised: “Won’t Back Down” received similar praise in Charlotte Monday before the Democratic National Convention. (Rhee was in attendance here, too, but not Bush.)

Reporting for The Los Angeles Times, Seema Mehta counted just a handful of protestors at the DNC showing. Given the party’s base, that’s surprising, Mehta writes:

Teachers unions have been the Democratic Party’s foot soldiers for more than half a century, providing not only generous financial backing but an army of volunteers in return for support of their entrenched power in the nation’s public schools.

But this relationship is fraying, and the deterioration was evident Monday as Democrats gathered here for their national convention. … Parent triggers, along with other emerging efforts, have some Democrats questioning their party’s longtime support of guarantees that public school districts have made to teachers for decades. Those efforts also include merit pay, charter schools, weakening the tenure system and evaluating teachers partly based on their students’ performance on standardized tests.

In an interview, Rhee told Mehta there’s no longer an assumed alliance between the Democratic Party and teachers unions. Reactions to “Won’t Back Down” in North Carolina seem to speak to that fact.

“There are now lots of Democrats who are saying, ‘You know what, we’re for teachers and teachers unions, we support the concept of collective bargaining, but there are clearly some things that need to change, and we are willing to stand up and talk about those challenges.'”
—Michelle Rhee, former chancellor of D.C. public schools

EdWeek‘s Klein says Democrats responded with praise similar to what she saw in Tampa last week. Still, she points out that the Obama administration hasn’t come out in support of the parent trigger:

But it’s clear that not everyone in the Democratic Party is ready to give the policy five stars—and that leaves some of the parent-trigger champions frustrated.

They argue that “liberals” should be for the trigger laws. In fact, parent trigger started as a lefty critique of dysfunctional schools and parents’ inability to influence them, said Ben Austin, the executive director of Parent Revolution, the Los Angeles nonprofit organization that is a force behind the policy, who spoke at a panel discussion after Monday’s screening of the film.

Of course, the film’s positive reception among Republicans in Tampa points to an issue that might not fall along party lines.