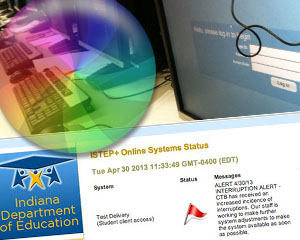 The statewide pass rate on ISTEP+ went up 2.5 percent in 2013, in spite of computer glitches that halted testing for two days in the spring.

More student passed the statewide ISTEP+ exam this spring than last, continuing the gains Indiana students have been making on the test for the past five years.

“Two and a half percent is a pretty big jump for a single year, so we find that very encouraging,” says Derek Redelman, the vice president for education and workforce development policy at the Indiana Chamber of Commerce.

Statewide, 73.5 percent of Indiana students passed both the math and English language arts ISTEP+ tests this spring — that’s a 10 percent increase in pass rates since 2008.

But it’s hard to say what effect, if any, the gains will have in the long run. As we’ve written before, state education officials are on track to replace or retool Indiana’s statewide assessment over the next two years. And whatever test Indiana students take next will test different academic standards that are likely to be more rigorous than the state’s current expectations.

To put this year’s gains into context, the ISTEP+ pass rate only increased about one percent between 2011 and 2012 — at the time, education policy analysts told StateImpact small gains were still a step in the right direction for Indiana students. And after computer glitches during the administration of spring exams had state education officials asking for an outside review of the results, a 2.5 percent increase in pass rates seems like the best possible scenario.

“Frankly some people really expected that independent reviewer to say that it had a huge impact and really screwed things up,” says Redelman. “The fact of the matter is it had no significance difference at all on the scores.”

But Indiana University professor Ashlyn Nelson says the results are less straightforward than that.

“I think the improvement overall in English was very, very modest,” says Nelson, who studies education policy at IU’s School of Public and Environmental Affairs. “The improvement in math was a bit more. It’s still difficult for me to place these scores in context because our standards for student achievement are pretty middling with respect to the other states and the standards that they have set.”

Part of the problem is the ISTEP+ measures state academic standards. So it’s hard to compare Indiana students to their peers in other states where expectations are different. Nelson says scores on tests like the National Assessment of Education Progress — known as “the nation’s report card” — suggest Indiana may not be setting the bar as high as other states.

We’ve written before that even if Indiana decides to reject the Common Core, the state is likely to end up with academic standards that look very similar. That means whatever test Indiana students take next will look more like new, Common Core-aligned tests being piloted in a handful of states and less like the ISTEP+ in its current form.

Redelman says in states like Kentucky and New York that have already made the transition to new tests, scores have gone down:

If we ever do make the jump to Common Core, then what I think the state is going to learn is as we’ve already seen in NAEP scores and elsewhere, the scores we’ve been looking at for years now in Indiana are not really a great reflection of where we are. We may find ourselves here in a couple of years looking at numbers that are significantly lower. That won’t mean that anything has really gone down, it will just mean we’ve done a little bit more honest assessment of where we are … that’s going to be a lot lower than what our state tests are currently telling us.