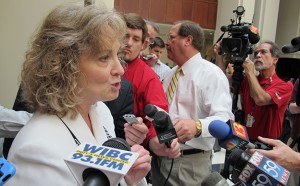 State Superintendent takes questions from reporters after computer glitches ground online ISTEP+ testing to a halt in the spring.

Computer glitches that delayed administration of the spring ISTEP+ exam did not have a noticeable impact on scores — in fact, the state’s passing rate was up about two percentage points from last year.

Statewide, 73.5 percent of students passed both the math and English language arts portion of the ISTEP, compared to 71 percent in 2012.

Click here to find 2013 ISTEP+ results by school and corporation. Or, check out a map of how scores have changed since 2012.

The Indiana Department of Education released preliminary ISTEP+ results Wednesday, about a week after schools received the scores and six weeks after a testing expert told state education officials finding a student whose ISTEP+ score went down because of a problem with the website where they were taking their test would be like “looking for a needle in a haystack.”

In total, testing expert Richard Hill identified only about 1,400 tests where gains fell short of expectations — less than two percent of the exams schools officials flagged for review. He asked the State Board of Education to invalidate those scores.

The results are considered preliminary because schools can still contest scores on the “applied skills” portion of the test, which is taken in early March. Computer glitches didn’t affect scores on essays and open-ended questions, but parents can ask for the section to be regraded.

How The Scores Will Be Used

State Superintendent Glenda Ritz has said the results of this year’s ISTEP+ exam shouldn’t weigh heavily in Indiana’s first round of teacher evaluations. But when she brought up her concerns back in July, State Board of Education members said it was too soon to make a decision on how schools should use ISTEP+ data.

At the time, board member Cari Whicker said that to discount the scores before Hill concluded his investigation was akin to throwing out a batch of cookies before testing one to see if it was burnt.

And with scores up across the board, it’s unlikely state education officials will be willing to discount the 2013 results even though some school districts have said they won’t use the ISTEP+ for internal accountability measures.

For her part, Ritz has said the state will never know how well students might have performed if not for the interruptions. But she’s promised to make all testing data available as soon as possible so schools can begin calculating already delayed school letter grades.

With this year’s gains, scores on the ISTEP+ are up 10 percentage points over the last five years.