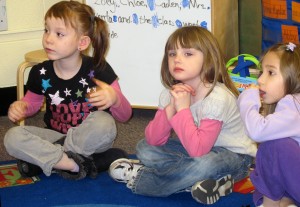 Head Start students at Eastview Elementary in Connersville listen to a story about dinsaurs.

The federal government won’t shut down on March 27 — that’s the good news.

But the continuing resolution the House approved Thursday locks in many of the education-related sequestration cuts for the duration of the fiscal year. From Ed Money Watch:

Policymakers opted not to restore funding to key programs like Title I grants for low-income children and IDEA Part B grants for special education. There are, however, a few exceptions.

Congress restored some funding for the Child Care and Development Block Grant, which the CR sets at $2.3 billion, about a $50 million increase from 2012 levels. And the bill continues funding without changes for both the Temporary Assistance for Needy Families (TANF) program and the Child Care Entitlement to States programs, each of which provides additional funding to states for child care and other subsidies.

Additionally, although the newly passed CR maintains the 5.1 percent funding cut applied to Head Start, the bill back-fills a $33.5 million portion of it. Most of that money will be dedicated to the re-competition process currently underway.

We’ll continue our coverage of automatic federal spending cuts next week with a continued look at the impact on Indiana Head Start programs.