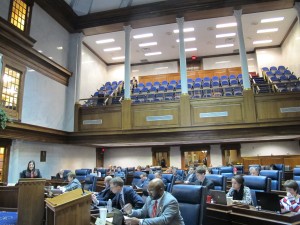 The Indiana Senate Chambers during a meeting of the Education Committee in February 2013.

The version of HB 1003 before the Senate Education Committee increases the maximum voucher amount from $4,500 to $5,500 and also makes more students eligible for the program, including kindergarteners who receive scholarships from other organizations to attend private school.

It’s that part that had Sen. Luke Kenley, R-Noblesville, questioning whether House Education Committee Chairman Bob Behning’s proposal oversteps the intention of the voucher law as originally written. Currently, students have to attend public school for a year before becoming eligible for a voucher.

But Behning counters that the point of the voucher program has always been to let parents — not lawmakers — decide where to send their kids to school. Here’s a look at some of the other testimony from Wednesday’s hearing.

Even with the voucher we face financial burden. You see, we receive the maximum amount the voucher program allows for our family, which is $4,500 — nearly $2,000 less than what our local school district receives per child from the state. In addition, we receive some smaller financial assistance to help close the gap between the cost of tuition and what the voucher program actually allows us to receive. Even with that help, the cost of that school [is thousands more than that] amount and I must pay additionally out of my own pocket every year to ensure [my son] is in an environment that meets his academic needs and allows him to excel.

Anna Gosman, administrator of the Christian Academy of Madison:

This has been a difficult time in our rural community as our local public school corporation has fallen on difficult financial times and has been forced to close three elementary schools in the last three years, increasing classroom sizes drastically and frustrating many parents who are now seeking a choice in their children’s education. We have seen enormous growth as families enrolling students have taken advantage of this opportunity to chose private school education. Last year, we had 110 students at our school, 9 of which took advantage of the school choice scholarship. This year our enrollment has exploded to 140 students, 47 of which are benefitting from the scholarship.

Robert Enlowe, director of the Friedman Foundation for Education Choice:

It took 3,919 kids the first year, $16 million is what it cost to education them. What the state would have spent on those children: $20 million. That $4.1 million was sent back to school districts, including everyone’s school in this room. If you project out what might happen next year, based on the average number of the vouchers and the average state amount, you’re still looking at bring another $4.1 million — that’s conservative, another $4.1 million — distributed back, all to the schools.

We oppose it because it is restricting the opportunity for a public school experience for children. How can parents make comparisons if they don’t have any basis to compare? We oppose it because a lot of potentially unknown costs. We don’t have idea how this is going to extrapolate in the future. We have no idea the dollar amounts needed or, therefore, the kind of impact it may have on public schools.

With HB 1003, for the first time students could get a voucher without transferring from a public school. Each voucher then becomes a new fiscal expense for the state, ending the rationale that this saves us money. This bill therefore has a fiscal impact. It would cost public schools, more than the lost revenue it’s already cost my district. In addition, we’ve yet to see one dollar returned to our district for the voucher students that have been sent back. We often got these children — sometimes after sports seasons end — or, even right before testing.

Why don’t we kick this bill into a study committee? Let’s have questions answered like whether the public schools students left were failing schools, whether the private schools students attended as a result of the scholarship were high performing schools, what percentage of each private school is attended by students receiving a scholarship, what is the true fiscal impact to the state of Indiana. And I’ve got many other questions that could be part of a legislative study committee.