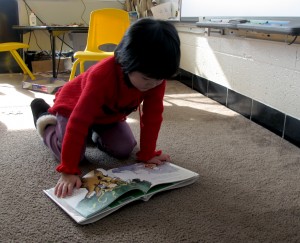 A student at Busy Bees, a preschool program in Columbus, reads a book.

The Indianapolis Star‘s Scott Elliott has this on a General Assembly bill that would create a $7 million, statewide pre-K pilot program — a proposal that got a lot of tough questions from lawmakers in the Senate Education Committee Wednesday, as Elliott writes:

In bit of a surprise, State Superintendent Glenda Ritz was among the critics who asked senators to vote no.

There’s no need for further study of preschool, Barnes said. Everyone knows it works. But the legislature has taken no steps this session to require students to attend kindergarten and, in Ritz’s view, kindergarten is not fully funded. Those things should come first, Barnes said.

Sen. Jean Leising, R-Oldenburg, suggested the price tag of the $6,800 per student enrolled in the pilot program was too high, Elliott reports. (Other estimates, as we’ve written, have pegged the cost at closer to $4,100 per student in a full-fledged, statewide program.)

Elliott has more on the tricky politics of the pre-K proposal on his Get On The Bus blog.

There are other concerns about the bill, too. From the blog of the Indiana State Teachers Association, the state’s largest teachers union:

The most concerning section of the bill included language that would allow a child who receives a choice scholarship for an early childhood education program to become eligible automatically for K-12 vouchers. This would create an entirely new pool of voucher students and would further expand Indiana’s voucher program. The early childhood program could become a feeder system for K-12 vouchers and subsidize private schools.