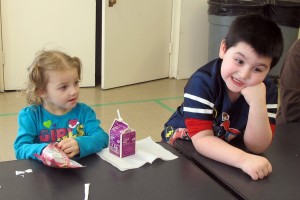 Head Start students at Evans Elementary in Lake Station eat a snack before their parents pick them up.

Low-income children and families will keep their Head Start placements — for now.

Across the state, program directors are looking for ways to reduce expenses that don’t involve cutting kids from the program even as automatic federal spending cuts reduce their budgets by 5 percent.

“The want to not touch the families is our first priority, but when you’re talking about a number that high, there’s just no guarantee,” says Geminus Head Start Director Karen Carradine, who oversees programming for 1,500 kids in Lake and Porter counties.

Carradine says Geminus won’t make any cuts to classrooms before the end of the school year. But there might not be funding to fill slots left vacant by 5-year-olds entering kindergarten in the fall.

Carradine just came to Indiana from Illinois, where she worked with the Head Start program in Chicago Public Schools. She says Geminus has a great program, but she’s already thinking of ways to make it better. For example, the high cost of childcare keeps many low-income parents out of the workforce. So she’s trying to figure out how to extend the day for them. 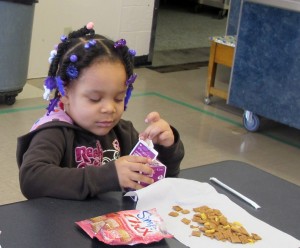 A Head Start student opens her milk in the cafeteria of Evans Elementary in Lake Station. Students eat a healthy snack before they go home for the day.

“Our full day runs six hours, but as we know, the parent that’s working or in school usually needs a bit more,” says Carradine. “We’d like to do more of a wrap-around: Four-hour Head Start program, four-hour childcare program for those parents who actually need that time.”

But as Carradine learns more about how automatic federal spending cuts will affect Head Start, it seems unlikely Geminus will be able to add new programming. In fact, it might be a struggle just to maintain the services they already provide.

She estimates Geminus is only serving about 40 percent of eligible families in Lake and Porter counties.

Across the country, programs are only funded to serve about half of the eligible families, says Indiana Head Start Association Executive Director Cheryl Miller.

“We have programs who have as many children on their waiting lists as they have slots that they fill,” says Miller. “I never hear back from programs that they don’t have a waiting list.”

Miller says it’s one thing to talk about losing spots — the White House says Indiana could lose as many as 1,000  — but she’s been telling programs “to hold children and families harmless.” That means they should only cut kids after making other cuts first.

“I hear from a lot of programs, though, that they are now cutting into the bone. They’ve trimmed everything they can possibly trim,” she says.

Miller says there isn’t much left to cut without sacrificing quality. Meanwhile the need for services is growing — she says families who never thought they’d be eligible are finding out they qualify for Head Start.

Michael Wells, an early education researcher formerly with the University of Indianapolis, says high quality preschool is out of reach for many middle-income families, let alone those below the poverty level.

How Cuts To Other Programs Trickle Down To Head Start

Head Start isn’t the only program feeling the burn. Carradine says the families Geminus serves also qualify for other federally funded services, like health clinics, food assistance and childcare vouchers. But she says some parents don’t know about the other help they could be getting until they contact Head Start.

“So a family that’s already connected through Head Start is more likely to be closer to the front of the line for those services,” says Carradine. The families that we can’t serve? That line’s just gotten longer.”

“You have to include not just what it costs to run an early childhood center where there are classrooms but you have to be able to support these families, too, by providing opportunities for them to build goals for themselves.”
—Karen Carradine, Geminus Head Start Director

Then there’s the impact of automatic spending cuts on other federal programs. Nearby Gary Community Schools gets grant money from the federal government to help disadvantaged students and uses some of those Title I dollars to send 4-year-olds to preschool. Carradine says cuts to that program could put more students on the waiting list for Head Start.

“How many of those kids now — how many of them are income-eligible for Head Start?” says Carradine. “They’re families we didn’t necessarily have to worry about because we knew if they lived in Gary they had access to the school system’s program. But now their spots could be cut.”

Where To Squeeze 5 Percent From An Already-Tight Budget

In a way, Geminus is lucky. Carradine says because the organization just started its fiscal year in February, there’s still time to rework the budget. But for Head Start programs whose grants expire this summer, the money has already been spent. She’s not sure what they’ll do, but she’s working on Geminus’ plan now. 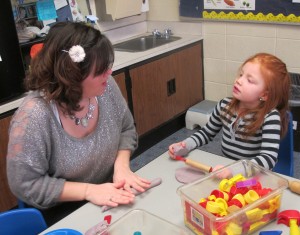 The Head Start program in Fayette County Schools may have to cut its full-day program to a half-day to make up the budget shortfall.

Carradine says her first move will be to cut administrative costs, and if she has to reduce staff, she’ll eliminate support positions before teachers and aides. There’s also talk of doing away with some classroom teaching and focusing on home-based early education. This would cost loss, but parents would lose access to childcare.