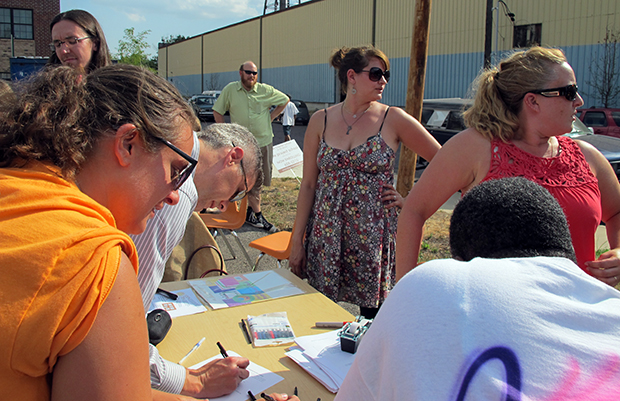 Rachel Maxwell, center, encourages parents to sign letters saying they'll send their kids to The Project School. The first day of school is Aug. 6, but school leaders still aren't sure if the courts will allow it to open.

Parents of children who attended The Indianapolis Project School will have to find somewhere else to send their kids after federal judge ruled Tuesday that Mayor Greg Ballard was within his authority as a charter school authorizer to revoke his sponsorship of the school.

Last week, a lower court judge blocked the mayor’s office from ordering the school’s closure, but U.S. District Judge Sarah Evans Barker ruled the mayor was right to close the school after serious concerns about the schools academics and finances emerged.

“Indiana law affords the sponsor of a charter school significant — indeed, almost total — discretion,” Barker wrote in her decision, according to a release from the school.

That near-total discretion is one more good reason to care about The Project School’s fight to stay open, even if you don’t live in the city. As school choice expands in Indiana, experts predict this isn’t the last time a charter authorizer — or the Department of Education, for that matter — will have to intervene in a struggling school.

Why Project School Parents Wanted Their Day In Court

Rachel Maxwell isn’t interested in sending her kids to another school. So last week, instead of attending an enrollment fair organized by the mayor’s office, Maxwell and a group of parents whose children attended The Indianapolis Project School stood outside holding brightly colored signs protesting Greg Ballard’s decision to close the school.

It was a calculated risk. At the time, Maxwell and other parents believed there was a chance their kids’ school would be allowed to open. She told StateImpact she’d continue to fight for TPS because she believes it is the right choice for her three daughters.

“If their educational needs weren’t being met, we wouldn’t be here. We left our first charter school for that reason,” says Maxwell, adding that the school provided challenging work for her academically-advanced oldest daughter.

Some parents and school leaders have been critical of the timing of the mayor’s decision, which is why they took the issue to a judge in the first place. News that Ballard intended to close the school came July 17, three weeks before classes were to start. That left the school little time to respond.

The Indiana Chamber of Commerce’s Derek Redelman says he’s sympathetic to parents now scrambling to find new schools for their kids. But he also says Ballard had no choice but to intervene when TPS failed to meet benchmark academic standards outlined in the school’s charter.

“Part of what makes [charter schools] special is that they have made a commitment to accountability to a greater degree of accountability than is true for traditional public schools,” Redelman says.

Redelman points out that legislation passed in 2011 allows more sponsors to authorize these schools. It also gives the Department of Education more authority to intervene if a school underperforms.

“If an authorizer does not step as has occurred in this case, then the state can step in,” says Redelman. “Certainly under this superintendent, Tony Bennett, I’m pretty sure that if the mayor wasn’t stepping in with a persistently failing school, then he would step in to close or in some other way change that school.”

Parents’ Reaction Is Normal, But Might Change Over Time

29 percent of students passed both the math and English language arts ISTEP tests last spring at TPS — it’s one of the lowest performing schools in Marion County.

Alex Medler is vice president of research for the National Association of Charter School Authorizers. He works with authorizers like the mayor’s office to make sure they’re following best practices. 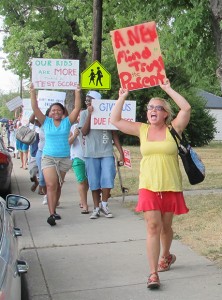 A parent holds up a sign during a rally to support The Project School. As they marched from a nearby park to the school, they chanted, 'Mayor Ballard, we've got the power. If you can't hear us, we'll shout louder.'

Medler says TPS’s seven-year charter was too long because research indicates four or five years is long enough to tell if a school will be successful.

But many TPS parents disagreed. In a meeting with the mayor, school leaders said a significant number of students came from struggling Indianapolis Public Schools and needed more time to reach grade level expectations.

“The existence of a traditional school that is worse is not a good reason to keep a bad charter school that’s not meeting standards open,” Medler says.

Medler says he’s seen what’s happening in Indiana before — in Michigan and other states who have had charter schools for longer. Initially, he says parents react with frustration and anger when an authorizing agency pulls the plug on a particular school. But over time, he says they become more familiar with the process and don’t want to keep their children in a charter that’s failed to meet accountability standards.

“We’ll vest some power into some entities in order to award charters with the promise that they will open up good schools, that they will hold these schools accountable, and close them if they’re not performing.”
—Russ Simnick, Indiana Public Charter Schools Association

Comments on stories StateImpact has written about TPS focus on why parents would want to keep their students at a school that’s struggling.

Jeffrey Henig is a professor of political science at Teachers College Columbia University. He says it’s not unusual for parents to defend a failing school if it’s one they chosen, not one their children have been forced to attend.

“Often they feel like they’re pioneers and the school is struggling through early development pangs,” he says.

Henig says as far as he knows, Indianapolis is the only city in the country where the mayor can authorize charter schools. But he adds that closing a school is always controversial, no matter who pulls the charter.

In a bizarre turn of events, the school ended up with a booth at its own enrollment fair after a judge stopped the mayor from closing the school until the issue could go to court. There, more than 220 parents signed letters stating their intention to send their children to the school.

Maxwell told she would use what happened at her daughter’s school as a teachable moment.

“Mayor Ballard gave me the chance to still take project-based education and teach my children how their government works and how when does not work for them the way they want it to, how to effectively and peacefully challenge that government,” says Maxwell.

Parents plan to meet Wednesday to discuss how to move forward. The schools at last week’s enrollment fair don’t have enough open spots to accomodate every TPS student, and some parents have said they’ll homeschool their kids until school leaders can find a new sponsor.

“This is a defining moment … not a defeat,” Banks wrote. “I’m convinced of that.”