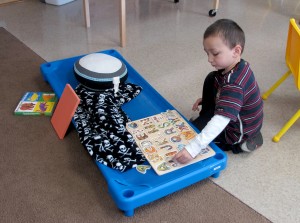 A student plays with an alphabet puzzle at Busy Bees Academy, a public preschool in Columbus.

Indiana is one of 11 states that doesn’t provide any funding for preschool, but that could pass if a small-scale pilot program passes this session.

Even though most people can agree that early childhood education is a solid investment, there’s uncertainty about how to pay for it. Gov. Mike Pence supports the current plan — a voucher-style program that would send 1,000 low-income students to preschool — but that proposal has hit some snags as it moves through the statehouse. State Superintendent Glenda Ritz says lawmakers need to fully fund kindergarten before moving on to pre-K.

I’ll be co-hosting Noon Edition, WFIU’s public affairs show, at 12 p.m. EST Friday. We’ll talk to early educators, community organizations, local businesses and advocates about the state of preschool in Indiana. Listen live on air or online and call in your questions, 812-855-0811.