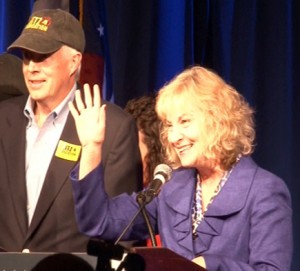 “Some of the key features of the Bennett agenda are actually enacted in laws,” says Les Lenkowsky, a professor in Indiana University’s School of Public and Environmental Affairs. “Those laws would have to be changed, and there’s still a strong base of support for those laws in the state legislature.”

Those laws are also written into Indiana’s No Child Left Behind waiver. Ritz has said that waiver deserves a closer look. But with a Republican governor and a Republican super-majority in the legislature, a complete roll back of Tony Bennett’s policies seems unlikely.

Back in August, Ritz made a prediction. She said she’d win her race — but admitted that without the support of Democrat John Gregg in the governor’s office, it would be a bad four years for her. Yet Tuesday night when Ritz took the stage to give her victory speech, she touted her credibility with state lawmakers and her ability to work across the aisle.

“I’m an educator. I’m a respected educator among the legislators. Remember, the last four years, they’ve seen me. They’ve heard from me. I’ve testified in many arenas,” she told StateImpact on Election Night.

Ritz may have a mandate from voters, but she faces a tough battle in the statehouse if she wants to change the course of the education overhaul started under Bennett. Governor-elect Mike Pence suggested Wednesday that state lawmakers would proceed with or without the state superintendent’s support.

“I believe in our candidacy, in the election of a super majority in the House of Representatives, we have a strong affirmation of the progress on education reform,” says Pence.

It’s entirely possible the legislature could continue without Ritz, says David Dresslar, executive director of the Center of Excellence in Leadership of Learning at the University of Indianapolis.

That would change the dynamic between the statehouse and the Department of Education because typically the state superintendent has a hand in formulating the policy he or she is expected to enact.

Indiana’s No Child Left Behind Waiver Is An Uncertain Variable

But even with the support of her own party in the legislature, it’s likely Ritz would have trouble modifying the NCLB waiver.

“A lot of reforms have come through the waiver process,” says Dresslar. “It’s kind of an unknown factor in terms of education reform because the waiver with the federal government does require many of the reforms that Dr. Bennett has championed.”

“There are probably things that she will be able to do to effect the timing of some changes, slow them up maybe, maybe in some cases make some substantive changes.”
—Les Lenkowsky, IU Professor

Ritz has said she doesn’t want to run afoul of any rules that would put Indiana’s federal education funding in jeopardy, but that hasn’t stopped her from criticizing the state’s accountability system. When the Indiana Department of Education rolled out letter grades last week, Ritz attacked the growth model used to calculate each school’s rating.

While a full-scale roll back is unlikely, another professor in IU’s School of Public and Environmental Affairs thinks there’s room for Ritz to shape Bennett’s policies so they’re more favorable for schools and teachers.

“What I can see is tinkering with the measures underlying the ranking system and also being more clear about the extent to which schools are sanctioned based on their ranking,” says Ashlyn Nelson.

Pro-Teacher Ritz May Still Be Able To Shape Some Policies

Many of Ritz’s supporters saw local control as a key reason why she won the election. While Bennett has supported state intervention in failing schools and even the possibility of a district takeover provision, Ritz has said the Department of Education shouldn’t be running schools.

Nelson thinks Ritz can help educators feel supported by the state instead of threatened, especially when it comes to shaping the state’s teacher evaluation system:

I think in the early years of Bennett’s administration he alienated a lot of support from teachers in Indiana in part because he was so accountability-oriented … That relationship seems to have recovered a bit over time as he’s made substantial efforts in the last two years to foster better relationships with school corporations and teachers and to help them implement their teacher accountability policies under Senate Enrolled Act 1, but he never fully recovered from the first couple of years.

For his part, Bennett congratulated Ritz for running an effective grassroots campaign. But he also remained steadfast in his belief that Indiana has the right idea on education overhaul.

“Again, no one will convince me that these aren’t the right policies. And we can argue that all night long,” he says.

Ritz and her supporters say it’s that mindset that cost Bennett the election.