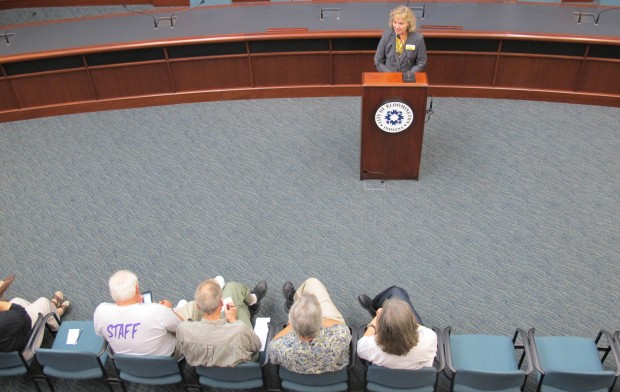 Glenda Ritz, the Democratic candidate for Indiana Superintendent of Public Instruction, speaks to about 60 people gathered in the Bloomington City Council chambers.

In her campaign for Indiana Superintendent of Public Instruction, Glenda Ritz knows her base: teachers.

She herself is currently employed as a teacher. She referenced “REPA II” and Indiana’s “growth model” in a Bloomington campaign event Tuesday night — terms teachers are more likely to know. She says she doesn’t shy away from her understanding of methodology and pedagogy.

Ritz, a Democrat, speaks directly to teachers because she’s counting on their help in mounting a “grassroots” effort to unseat GOP incumbent Tony Bennett. Ritz hopes that support can counter Bennett’s substantial advantage in campaign fundraising.

“I am not worried about funding for this campaign,” Ritz told StateImpact Tuesday. “I have a good grassroots campaign. And at the end of the day, it’s about who shows up at the polls, and I firmly believe that I’ll be the next superintendent of public instruction.”

Any way you slice the numbers, Bennett holds a lopsided campaign fundraising advantage:

Since Ritz entered the race in June, Bennett has out-raised her by a 4-to-1 margin. Out of the $112,000 contributed to Ritz’s campaign, $100,000 has come from two infusions of cash from the political arm of the state’s largest teachers union. Campaign finance records show he has more than 30 times Ritz’s cash-on-hand total.

(You can compare for yourself: We’ve posted Ritz’s totals and Bennett’s totals through July, and neither candidate’s totals have changed much in August.)

Ritz, however, hopes campaign organizing can trump campaign coffers. She told her Bloomington audience Tuesday night she’s counting on union assistance in organizing teachers “not at the district level, but at the school level.” 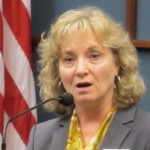 She tells StateImpact her message resonates most with teachers who feel “disrespected”:

Keep in mind that I’m coming right out of the classroom, so I’m talking with the heart and the passion of an actual educator and have seen what Tony Bennett’s policies have done to education. That’s why I’m running. And yes, I have the knowledge base to be technical — so to speak — about issues and policies. I understand what is being enacted and what is happening to the schools and the students that we teach. And yeah, you’re hearing a big contrast between Tony Bennett and myself because I’m a teacher right out of the classroom.

Bennett was also a classroom teacher for 9 years in the ’80s and early ’90s before taking several administrative positions.

Ritz says she felt compelled to run for the post because of the growing prevalence of standardized testing in the schools, specifically citing the IREAD-3 reading exam as what drove her into the race. She is a plaintiff in a lawsuit against Indiana’s new private school voucher program, which she says siphons public dollars away from public schools. Ritz also criticizes the state’s teacher evaluation mandate as too punitive.

Bennett has said the evaluation mandate is oriented toward rewarding good teachers, not punishing bad ones. He has said parents need to have options to leave public schools that aren’t serving their kids. Bennett also says testing requirements ensure all children are getting quality education.