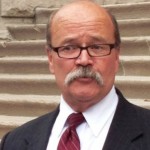 Democrat John Gregg is running for governor against Mike Pence.

John Gregg is the Democrat who ran unsuccessfully to replace Mitch Daniels as governor of Indiana. He was defeated by Republican Congressman Mike Pence.

Gregg represented the state’s 45th District from 1987 to 2003, including six years as Speaker of the Indiana House. His running mate was Vi Simpson.

Listen to StateImpact‘s complete interview with Gregg — we’ve posted it along with a transcript here.

Gregg called for increased access to early education for middle-income families. (Indiana is one of 11 states that doesn’t have dedicated funding for a pre-kindergarten program.) He proposed a pilot program for 4-year-olds based on what schools are doing in Wisconsin.

Gregg also supported raising the high school graduation rate and making college more affordable need to be goals in Indiana. But he also called on schools to prepare kids who don’t plan to go to college to enter the workforce with more vocational education programs.