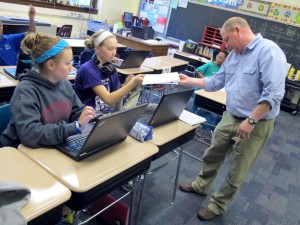 In flipped classrooms, students watch online videos of lectures at home so they can work on classwork in school. Teacher Troy Cockrum requires his students to take notes on the videos, which he checks daily.

Trying to decode the language in Indiana’s teacher evaluation law? The Lafayette Journal and Courier offered a primer in their weekend coverage of new educator effectiveness guidelines.

We’ve written about what evaluations looked like last year in three districts that were part of a state pilot program. But now that school’s back in session, every corporation in the state will be measuring teacher effectiveness. Here are five things you need to know about the new law.

Got a question about Indiana’s teacher effectiveness law? Let us know below, and we’ll try to find an answer.