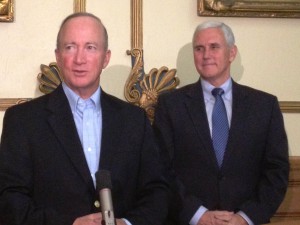 Governor-elect Mike Pence and Gov. Mitch Daniels address the media to discuss their transition plans. Pence and Daniels promised a steady hand on the till on education policy, despite state superintendent Tony Bennett's electoral defeat.

“In our candidacy, in the election of a super majority in the House of Representatives, we have a strong affirmation of the progress on education reform,” Pence said Wednesday, according to Indiana Public Broadcasting‘s Brandon Smith.

Pence said those words at a press conference with outgoing Gov. Mitch Daniels, who was instrumental in enacting many of the education policies — a private school voucher program, a teacher evaluation mandate, new charter school rules, and others — Bennett supported.

“Not a word of one of those laws is going to be changed unless it’s extended further in the direction of reform,” Daniels said, adding, “Every other factor that matters is aligned, in this state, in the direction of progress and change and reform of teacher accountability, of more choices for families, of more ability for school leadership to lead.”

Voters elected Democrat Glenda Ritz Tuesday in Indiana’s most unexpected election night turn. Ritz not only had the financial and organizational support of the state’s teachers unions, but she had the support of thousands of Indiana teachers who felt targeted by Bennett’s policies.

Pence says he looks forward to working with Ritz to find areas of common purpose. He says he hasn’t formed an opinion on making the Superintendent of Public Instruction an appointed — rather than an elected — position.