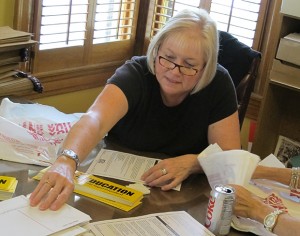 Scroll down to take a look at our map.

Glenda Ritz’s staffers called it the “campaign in a box” — an idea so simple, it doesn’t sound at first like a campaign strategy.

Everyone who contributed $25 to the Democratic state superintendent-elect’s bid to unseat GOP incumbent Tony Bennett received a “campaign in a box”: a yard sign, five bumper stickers and campaign postcards with Ritz’s main talking points.

Every contributor’s job was to distribute the materials and talk to others they knew about Ritz’s policies.

Bennett may have raised $1 million more than Ritz ultimately did, but Ritz’s contributions — many from teachers concerned over the direction of Indiana’s education policy — had a multiplier effect that fanned out across the state.

To visualize the impact of Ritz’s “campaign in a box,” we made a map of everyone who contributed enough to her campaign to receive one. Take a look:

This map shows all of the contributions from Indiana voters to Glenda Ritz’s campaign of $25 or more — the amount required for a donor to receive a Ritz “campaign in a box.” The blue dots represent individual contributors, the yellow dots show contributions from PAC’s or organizations.

Howey Politics Indiana reported Ritz made a $130,000 ad buy to run television spots in some of the state’s smaller broadcast markets.

But as we wrote earlier this week, semi-retired teacher Cindi Pastore feels the collective union impact was not as great as personal contacts from Ritz supporters. She toldStateImpact:

I probably had 50 conversations over the course of the last year, at least. I was trying to count up how many people I personally influenced. I came up with about 15 [people] that I know for certain that I was the factor on because they knew me or I made a convincing argument…

I did a lot of talking to people my mother’s age. She is not current in what’s going on in the schools — although she’s more educated than most. On the other hand, she’s been brought up all her life that Republicans are good… So I took it down to the level of her great-grandchild and I said ‘This is how Bennett’s policies have affected Nicholas.’

Pastore says social media was also critical. She says, for some teachers, the frustrations teachers they on Facebook naturally progressed toward activism — and helped fuel Ritz’s campaign.

Outgoing state superintendent Tony Bennett told reporters after conceding the race on Tuesday night he felt his opponent ran “a very effective ground game” with the assistance of the teachers unions.

“I’m not here to vilify them — that’s their job. They had a candidate. They worked their tails off to get their candidate elected. More power to them,” Bennett said.