Purdue president France Córdova announces the university's move to a year-round academic calendar in January. University officials announced the change at the headquarters for the Lumina Foundation in downtown Indianapolis.

Two months ago, not two blocks from Monument Circle in Indianapolis, Purdue University officials invited the media to the headquarters of the Lumina Foundation. Founded in 2000, the $1 billion non-profit funds grants and research on higher education policy.

Purdue officials were announcing plans to move to a year-round academic calendar. While there were many factors behind the decision, Indiana’s recent emphasis on a “performance funding” system for the state’s public universities at least provided a context for the move. The newly-reworked system is designed to help students complete degrees more quickly at a lower cost.

The significance of the announcement’s location wasn’t lost on the officials present. The Lumina Foundation has been key in advocating for performance funding nationwide — and it looks like a lot of policymakers, including President Obama, have been listening.

The Rebirth of Performance Funding

It’s not a new idea, writes Joanne Jacobs in U.S. News & World Report, as more than 26 states adopted differing forms of a performance funding system between 1979 and 2007. Though shrinking budgets did away with many of the performance bonuses, Lumina and other groups are backing a push to bring the idea back. Jacobs writes:

Performance funding is being adopted or strengthened in a majority of U.S. states, says Jamie Merisotis, CEO of Lumina Foundation for Education, which is funding research and grants to states developing new funding models…

“There’s a possibility it’s changed outcomes,” but it’s difficult to exclude other factors, says Dougherty. As for [the latest resurgence of performance funding], it’s so new there’s no data.

“I’m not sure prior experiments put enough resources on the table” to make a difference, says Lumina’s Merisotis.

“The idea that we can’t measure learning outcomes is increasingly incorrect,” he says. “Higher education will be measured by outcomes for students—learning outcomes, critical thinking, can they get a job and make a living wage?”

Indiana’s Commission for Higher Education voted in December to expand the portion of the state’s higher education budget that’s tied to performance metrics. In the upcoming budget cycle, Indiana schools will be judged on seven criteria measuring how many of their students have graduated on-time and with “high-impact” degrees. 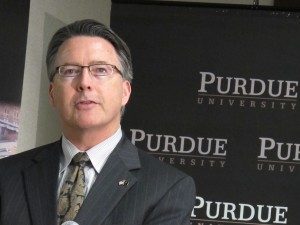 And Indiana colleges have noticed. Indiana University cut summer tuition. Ball State rolled out a package of incentives to get students to complete degrees on-time.

And Purdue officials praised performance funding as they mingled with the press on that January morning in a Lumina Foundation conference room.

“We’re a big supporter of performance funding. In fact we think it should go faster, farther than it does now,” Purdue provost Tim Sands told StateImpact. “Keep it coming. Ramp it up. The historical incremental allocation process [paying colleges based on their enrollment] is an artifact of the past.”

Sands added, however, “we have other revenue streams, including tuition and research. We fortunately have generous donors and they help us sustain the university. State appropriations are a piece of the puzzle — an important piece, but it’s not the whole thing.”

Still, Indiana Higher Education Commissioner Teresa Lubbers said — while speaking on a panel convened by the Lumina Foundation and NPR — schools now have more incentives to watch their performance numbers closely. In the next budget cycle, 6 percent of schools’ funding will be tied to performance metrics. Right now, that figure is only 5 percent.

‘Get Results, Get Paid’

In its own way, performance funding has even found a way into the Obama administration’s federal higher education proposals. In an article aptly titled “Get Results, Get Paid,” Community College Week reported:

When President Obama stood before an enthusiastic throng of students at the University of Michigan the day after his State of the Union address and declared that colleges must rein in tuition and produce more graduates, he was doing more than striking a populist chord during an important election year.

By unveiling a list of proposals that would steer more money to states and institutions that are able to graduate more students and prepare them for the workforce, the president marked a significant shift in educational policymaking. An administration that once emphasized access above all else was now talking about something else: how to best get better results from colleges in an austere economic environment…

His remarks gave voice to a trend that is gathering momentum in states across the country: funding colleges based not on enrollments, but on measurable educational outcomes.

The trend being driven by two converging trends: the need to produce more college graduates for a 21st Century economy as state support for higher education continues to recede at historic levels.

“We are seeing a growing emphasis on outcomes-based funding,” said John Curtis, policy analyst for the American Association of University Professors. “It’s a result of the economic environment, but it’s also being seen as a way to measure what colleges are doing.”

This “growing emphasis on outcomes-based funding” largely comes back to the influence of the people — and money — that flows through those offices, not two blocks from Indianapolis’s Monument Circle. The American Association of State Colleges and Universities writes:

The Lumina Foundation, Bill and Melinda Gates Foundation, College Board, National Conference of State Legislatures (NCSL), National Governors Association (NGA), and Education Commission of the States (ECS) have promoted performance-based funding as a policy option for improving campus productivity and boosting college completion. The Obama administration has also recommended that states explore performance-based funding to improve college completion. Together, this has translated to conversations and policy action in state capitols across the nation.