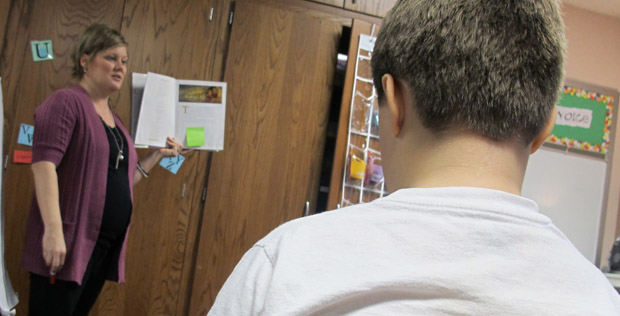 The clock is ticking — and the pressure is mounting — for every Indiana third grader.

In less than three weeks, 8- and 9-year-olds will all take a standardized test of their reading abilities. Those who do not pass the exam, the IREAD-3, also don’t pass third grade.

Gov. Mitch Daniels has said the policy ends “the cruel, defeatist practice of passing children who cannot read into fourth grade.” But while many believe third grade is as appropriate time a time as any for a drastic intervention, some are still wondering whether holding them back is the right way to help them.

Emily Richmond writes in The Atlantic:

While [holding students back] might seem like a short-term solution, it could do long-term harm to a child’s social and educational development…

Florida implemented a third-grade retention initiative in 2002, and saw its fourth-grade reading scores soar. But reading scores for the state’s eighth grader have flatlined.

When asked where he stood on his state’s initiative to hold back third graders, educational psychologist David Berliner — the Regents Professor of Education at Arizona State University — was blunt in his assessment.

“It seems like legislators are absolutely ignorant of the research, and the research is amazingly consistent that holding kids back is detrimental,” Berliner said. “Everybody supports the idea that if a student isn’t reading well in third grade that it’s a signal that the child needs help. If you hold them back, you’re going to spend roughly another $10,000 per child for an extra year of schooling. If you spread out that $10,000 over the fourth and fifth grades for extra tutoring, in the long run you’re going to get a better outcome.”

Laudner acknowledges some states have had failed attempts at holding back students, known as “retention.” But these states didn’t have the right research to help them craft good policies, like in Florida.

“The question is not whether retention is ‘good’ or ‘bad’ — that all depends on how it is used,” Laudner blogs. “The evidence on the overall literacy effort in Florida — which includes retention as a centerpiece — is overwhelmingly positive.”

Indiana Department of Education officials point out students who don’t pass the IREAD-3 can move on to fourth grade, but must take third grade tests. From the Associated Press:

Indiana Department of Education spokeswoman Stephanie Sample acknowledged that although the law only requires that the student be retained in third-grade reading, moving that student forward in other subjects will prove difficult.

“What the law specifically says is that kids who don’t pass have to take the ISTEP again and can’t move on to fourth-grade reading instruction,” she said. “Functionally, that means for most classrooms the student will be (held back). But it is still a local determination.”

State education officials say research indicates that students from kindergarten to grade three are primarily “learning to read,” but in fourth grade, they “read to learn.” They say that students who do not read proficiently by fourth grade will struggle to keep up.

Sample said the state is not expecting to see a large number of students held back due to the reading test.

As we’ve reported, Indiana educators are trying to use data on students’ reading performance to help them prepare for the exams. They’re using different diagnostic tools — some call them “temperature checks” — to identify which students need extra coaching ahead of the exams.

GOOD‘s education blog points out, unlike in Florida, Indiana schools are not getting increased state funds to help pay for new teaching tools or teacher training to boost reading scores.

What do you think of Indiana’s third-grade reading exam? Tell us in the comments section.