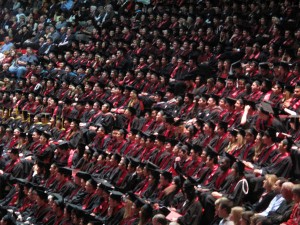 President Obama delivered a shot heard ’round the higher education world during his State of the Union address Tuesday.

“Let me put colleges and universities on notice,” the President told Congress. “If you can’t stop tuition from going up, the funding you get from taxpayers will go down.”

To carry out this vision, we learned Friday, Mr. Obama plans to link colleges’ eligibility for federal student aid programs to “the institutions’ success in improving affordability and value for students,” reports The New York Times:

Under the plan, which the president outlined on Friday morning in a speech at the University of Michigan, the amount available for Perkins loans would grow to $8 billion, from the current $1 billion. The president also wants to create a $1 billion grant competition, along the lines of the Race for the Top program for elementary and secondary education, to reward states that take action to keep college costs down, and a separate $55 million competition for individual colleges to increase their value and efficiency.

In a White House fact sheet released Friday (EdWeek has it here), administration officials said the President’s plan would be designed to incentivize schools to offer “quality education and training that prepares graduates to obtain employment and repay their loans.” If a university can’t do this, they will receive less federal student aid money, if not lose that funding altogether.

If the plan is implemented, Indiana’s public colleges would likely face “accountability” measures from two sets of education policymakers — from federal officials, urging schools to cut students’ cost of attendance; and from the state level, to increase the number of students who graduate on time.

The Indiana Commission for Higher Education is recommending increasing the percentage of the state’s higher education budget given to Indiana’s public colleges and universities based on their performance. It’s a move Indiana’s higher education officials hope will save students money.

Indiana’s public universities are mostly on-board with the state’s performance funding plan — although they have some concerns about how the plan will be implemented.

But will federal lawmakers get on-board with the President’s plan? Some are skeptical a “Race to the Top”-like initiative will work in colleges, especially because some states are struggling to implement the administration’s signature education program in a K-12 setting.

Amy Laitinen at the The Quick & The Ed, on the other hand, writes Congress is likely to get behind the plan:

Although we don’t yet know all the details, it seems these proposals have the potential to make a real difference for students. In an election year in which 75 percent of Americans think college is unaffordable and 57 percent say college is not a good value, it’s hard to imagine how Congress could justify not leveraging existing dollars to rein in costs or to making the costs and benefits of going to college more transparent to students and their families.