Who's Keeping Track Of Your University? 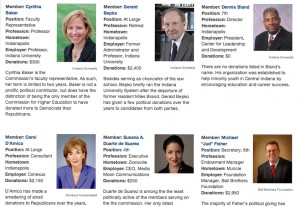 The Commission for Higher Education is the governing body responsible for overseeing post secondary institutions. The body is empowered to make budgetary recommendations to the Indiana State General Assembly and tuition recommendations to colleges and universities.  The ICHE also has final approval powers over the creation of degree programs.